EDITORIAL: It’s time for Japan to step up and join nuclear ban treaty 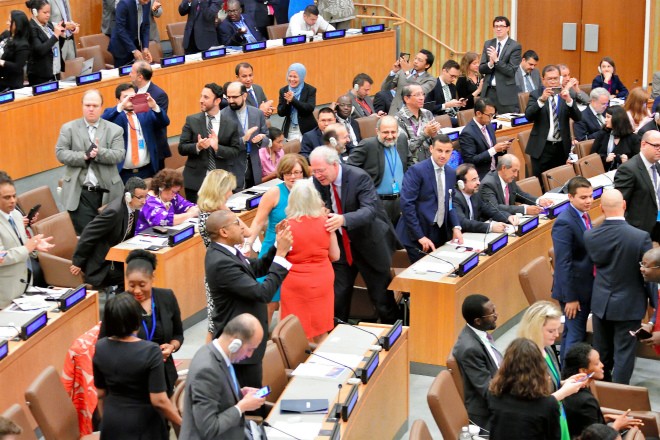 Participants at a U.N. meeting in July 2017 applaud passage of the Treaty on the Prohibition of Nuclear Weapons. (Asahi Shimbun file photo)

Three years ago to the day, the world's first treaty embodying the notion that no nuclear weapons should be allowed to exist on Earth was adopted by the United Nations on July 7, 2017.

The Treaty on the Prohibition of Nuclear Weapons bans developing, testing, producing, possessing, using or threatening to use nuclear weapons.

The treaty was adopted by a vote of 122 countries, or 60 percent of the U.N. member states, in favor. The agreement will come into effect 90 days after the number of nations that have ratified it reaches 50.

Last month, Lesotho, an enclaved kingdom encircled by South Africa, became the 38th country to ratify the treaty. More countries are expected to join the pact in the coming months.

Despite concerns about the COVID-19 pandemic's delaying effect on the process, the treaty is now believed to have a good chance of coming into force later this year or early next year.

The international campaign to establish a legally binding international treaty to prohibit nuclear arms was first led by a group of countries including Austria and Mexico. It was later joined by Vatican City, home to Pope Francis, who has called for a "world without nuclear weapons," and Cuba, which was at the center of a crisis in 1962 that brought the Cold War to the brink of a nuclear war.

These early proponents were followed by South Africa, which scrapped its nuclear arms development program in 1989, Kazakhstan and island nations in the South Pacific, victims of nuclear tests, and Bangladesh, which has been threatened by the bitter nuclear rivalry between India and Pakistan.

The movement is a scathing indictment against nuclear arms by countries deeply worried about the threat posed by massive nuclear arsenals in the world that could be used in war.

The treaty denounces all nuclear weapons, including those that devastated Hiroshima and Nagasaki in 1945, as "an absolute evil" and calls for the protection of human security under a global "non-nuclear umbrella."

If a country that has joined the treaty is threatened by a nuclear attack after it has come into effect, the nuclear powers would be accused of violating international law. Signing the treaty is meaningful, at least to some extent, from the viewpoint of national security.

The International Campaign to Abolish Nuclear Weapons (ICAN), a coalition of nongovernmental organizations promoting the cause, has been pushing a campaign "Don't Bank on the Bomb," aimed at pressuring financial institutions to stop providing funds to nuclear arms programs.

According to the latest report on the campaign, a total of 325 financial institutions provided more than 81 trillion yen ($754.45 billion) of funds to 18 companies linked to nuclear weapons. Since the treaty was adopted in the second half of 2017, however, 94 of them stopped financing such businesses.

The business community will find it increasingly more difficult to ignore this campaign, in which citizens pressure their banks to sever their business ties with companies involved in the production of nuclear arms. The campaign will gain even more traction when the treaty comes into force, officially making nuclear weapons illegal.

An international signature campaign urging all countries to join the treaty, which has been driven by hibakusha, atomic bomb survivors of Hiroshima and Nagasaki, and young people calling for participation on the streets, has collected more than 11.84 million signatures.

Nearly 30 percent of all local assemblies in Japan have adopted a proposal calling on the Japanese government to sign and ratify the treaty.

Participation of Japan, which suffered the horror of nuclear devastations, would boost the significance and impact of the treaty.

As it marks the 75th anniversary of the atomic bombings of Hiroshima and Nagasaki, Japan should start taking steps to respond to growing international calls for embracing the groundbreaking treaty and demonstrate its commitment to pursuing the elimination of nuclear weapons as a real goal.