A scientific expedition studies plastic waste off the Boso Peninsula. (Provided by the Japan Agency for Marine-Earth Science and Technology) 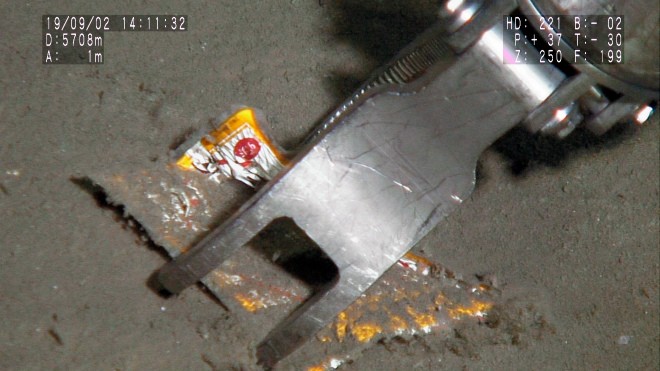 A plastic hamburger bag is spotted on the seabed around 5,700 meters deep during an expedition using the Shinkai 6500 manned research submersible. (Provided by the Japan Agency for Marine-Earth Science and Technology)

A 36-year-old plastic hamburger bag was found on the seabed more than 5,000 meters deep off the Boso Peninsula, underscoring the durability of the waste that is plaguing the world’s oceans.

The bag and other plastic garbage were detected in the light emitted by the Shinkai 6500 manned research submersible operated by the Japan Agency for Marine-Earth Science and Technology (JAMSTEC).

JAMSTEC has opened a fact-finding study on how seaborne plastics accumulate and sink. It conducted a scientific expedition by using the Shinkai 6500 and its support vessel, the Yokosuka, off the Boso Peninsula in Chiba Prefecture in August and September 2019.

Plastics waste survives for long periods after being released into the environment. Previous attitudes and lifestyles of rarely caring about where waste goes led to a crisis situation for oceans and waterways, environmentalists say.

Experts say the seas have five “gyres,” or areas that are prone to accumulate trash. One gyre extends from the waters off California to Hawaii in the North Pacific.

A belt-like zone containing a surfeit of refuse, called the Great Pacific Garbage Patch, begins there and extends further west to waters around Japan.

The extent of accumulated trash in Japanese waters has been studied in certain areas, including off the main island of Shikoku. But there has not been much research in other regions, including off the Boso Peninsula, Hokkaido and Okinawa Prefecture.

Scientists have speculated that waters off the Boso Peninsula are likely to be gathering waste, partly because of their proximity to the greater Tokyo area, a huge source of seaborne plastics, and also due to the Kuroshio Current.

TOOTHPASTE TUBE AMONG THE FINDINGS

JAMSTEC’s study found daily items, such as a toothpaste tube, and the hamburger bag, which was made in 1984, among plastic waste on the seabed 5,700 meters below the surface.

Plastic waste adrift in the ocean is degraded by ultraviolet light and crushed by waves and other factors into microplastics, or grains measuring 5 millimeters or less in size.

Seafloor deposits, deep-sea benthos and other samples were collected during the study. The scientists plan to study them to determine the types and quantities of microplastics contained in the deposits and their impact on deep-sea creatures.

The study showed that floating seaborne plastic waste tends to gather in large volumes in areas where vortices are formed, according to Masashi Tsuchiya, deputy group leader with JAMSTEC’s Marine Plastics Research Group.

By contrast, sea-bottom plastic waste was found to abound not just beneath vortices but also outside of the areas containing them.

“Broader areas need to be studied for locating seabed plastic waste because complicated ocean flows in boundary areas between the Kuroshio and Oyashio currents could be playing a part," Tsuchiya said.