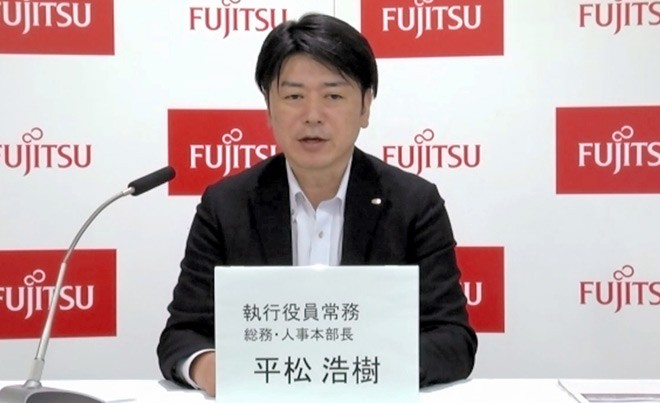 Fujitsu Ltd. will slash its office space by 50 percent in the next three years and make teleworking the standard for domestic staff to adapt to the “new normal” that requires coexisting with the novel coronavirus.

The pillar of the new policy is adopting remote working as the company’s standard work style and allowing its employees to choose where and when to work by themselves.

Under the new policy, Fujitsu will set up more small offices, while reducing its office space in Japan by half. It will also adopt a personnel management system where workers are rewarded based more on their performance than seniority, targeting all employees.

“The new policy will help not only reduce costs, but also boost productivity and provide employees with more options to work in a less stressful environment,” said Hiroki Hiramatsu, head of Fujitsu's human resources unit.

The pandemic prompted the company to set a goal of having only up to 25 percent of its employees, except those working at factories, coming to its offices. Of some 80,000 employees in the country, about 80 percent are working from home.

From July, Fujitsu will expand flexible working hours to cover all its workers without setting core working hours, during which time employees are required to work at the office.

The company will also allow its staff to choose their workplaces by themselves, but will stop providing them with money to buy their commuter passes and instead pay for their transportation expenses each time they report to work.

Fujitsu will also no longer require employees to live apart from their families in order to relocate to jobs in other cities if they can carry out the work by remote working or business trips.

The company will provide its staff, including factory workers, with 5,000 yen ($46.50) a month to create an environment for teleworking.

To make up for a lack of face-to-face communication, a challenge workers often face during remote working, Fujitsu will set up more smaller satellite offices equipped with communication tools for video conferences in addition to hub offices, where employees can meet with other staff or with clients and negotiate business deals.

Along with the move to remote work, the company is shaking up its corporate culture.

In April, Fujitsu ditched its seniority-based personnel management system and adopted one based on job description where employees are hired for certain jobs and rewarded based on their performance. The new system targets some 15,000 workers in managerial positions.

The company will start negotiating with its labor union by the end of the current fiscal year, which started in April, to expand the management system to cover all its workers in the future.

Fujitsu will also require employees to attend a one-on-one monthly meeting with their bosses and will draw up guidelines that clarify what their role entails, including job descriptions and necessary skills.