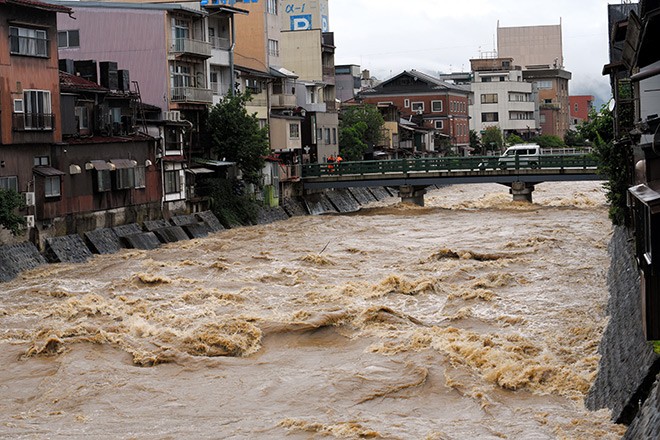 The water level rises in the Miyagawa river flowing through the central part of Takayama, Gifu Prefecture. (Shuhei Yamashita)

The heavy rain that caused more than 50 deaths in the Kyushu region moved to central Japan on July 8, prompting highest-level warnings against flooding and landslides in two prefectures.

The Japan Meteorological Agency (JMA) issued the special warning for the Hida region in the northern part of Gifu Prefecture as well as the Tono and Chuno regions in the southeastern section of the prefecture.

Another special warning was issued for the southern part of Nagano Prefecture and the mountainous Norikura-Kamikochi region in the central part of the prefecture.

The Level 5 warning for those areas means that residents should be aware that they may already be in the midst of a major disaster.

The special warning was downgraded to a heavy rain warning by noon on July 8.

By early July 8, records were broken for 24-hour rainfall in Gero, Gifu Prefecture, which received 414 millimeters, in Takayama in the same prefecture that was drenched with 309 mm, as well as 276 mm in Kitsuki, Oita Prefecture, and 310 mm in Kusu, also in Oita.

Seismic activity that has shaken the border area between Gifu and Nagano prefectures since April may have loosened the ground, so JMA officials urged extra precautions for the possibility of landslides.

The rainy season front remains stalled over a wide range from western to eastern Japan, and torrential rain continues to fall in Kyushu.

Kanoya in Kagoshima Prefecture recorded 81 mm of rainfall in one hour early on July 8. Heavy rainfall of about 70 mm an hour also fell on Suo-Oshima, Yamaguchi Prefecture, Miyoshi in Tokushima Prefecture on the island of Shikoku, and Nose in Osaka Prefecture.

The humid air from the south that dumped heavy rain on Kyushu moved to the main island of Honshu, drenching the Tokai and Kinki regions as well.

The rainy season front is forecast to hover over a wide part of Japan until July 10, meaning heavy rain will likely continue for large parts of western and eastern Japan.

FlOODING OF HIDAGAWA RIVER IN GERO

Officials of the Gero city government said the Hidagawa river had overflowed and 15 homes were flooded, but there were no reports of any injuries as of 7:50 a.m. on July 8.

Central Japan Railway Co. (JR Tokai) suspended services on its Tokaido, Chuo, Takayama and Iida lines from early on July 8 due to the heavy rain. Services were also partially suspended on the Mikawa Line of the Nagoya Railroad Co. and the JR Kansai Line.

Certain sections of the Tokai-Hokuriku expressway operated by Central Nippon Expressway Co. were closed to traffic. Other parts of the Tomei and Shin-Tomei expressways could also be closed later in the day.

(Ryo Yamagichi contributed to this article.)