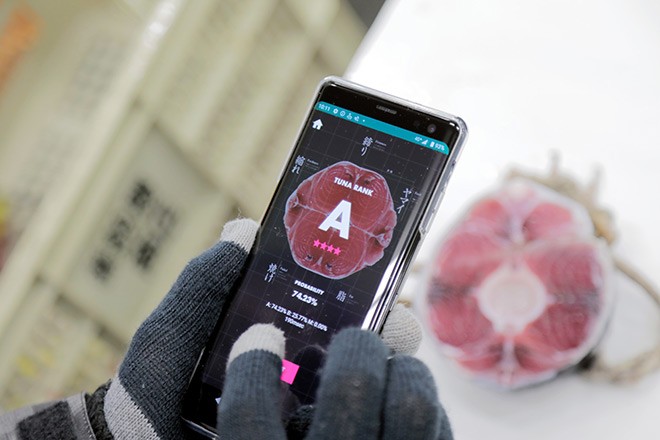 A leading Japanese sushi-go-around restaurant chain operator has debuted an artificial intelligence (AI)-based smartphone app to stand in for its buyers who judge tuna quality.

Kura Sushi Inc. also aims to cut about half of its in-store staff as it further automates the operation of its outlets.

The company announced July 7 it had begun using the app, which allows buyers to check the quality of tuna remotely as they cannot freely travel abroad to purchase fish due to the COVID-19 pandemic. The company also aims to find new suppliers.

The special app called Tuna Scope assesses tuna on a three-point scale from photos taken of the cross-section of the fish's tail.

It was developed by advertising agency giant Dentsu Inc. and other companies.

Kura Sushi's fish buyers traditionally examine the cross section of the tuna's tail to determine fat content and firmness of fish flesh, a representative of the company said.

The app can reproduce assessments made by skilled buyers with 90 percent accuracy, according to the official.

It was developed by crunching data from more than 4,000 tuna to create criteria for how human buyers assess tuna quality.

Kura Sushi purchases 70 percent of its fish for sushi overseas. The company decided to adopt the new system since it allows buyers to ensure the quality of fish they purchase at a certain level without on-site checks, which became difficult due to the travel restrictions brought about by the pandemic.

Kura Sushi on July 7 also said it plans to introduce self-checkout machines at all its outlets by October 2021, and will start installing them from this fall.

“We want to reduce the number of staff needed to operate our outlets by around half,” said Kura Sushi Vice President Makoto Tanaka.

The machines will enable customers to eat at outlets without interacting with staff, the company representative said, since the chain has already automated the procedures for receiving customers when they come in and totaling up their bills.