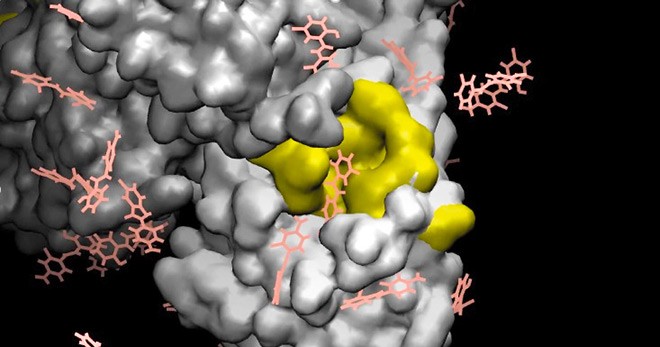 A computer simulation illustration showing the Niclosamide medication in pink attaching to a protein of the novel coronavirus (Provided by Riken and Yasushi Okuno, a Kyoto University professor)

Computer simulations using the Fugaku supercomputer pinpointed medications to treat tapeworm and other parasites as being possible candidates against COVID-19 infection.

The team at Kyoto University programmed the Fugaku to simulate how 2,128 medications might work in inhibiting one of the proteins found in the novel coronavirus.

In the course of the research, the team learned that some of those medications with a high probability of inhibiting the main protease of the novel coronavirus were being tested overseas as possible anti-viral medicines against the coronavirus.

One of the medications found to have this capability was Niclosamide, an oral medication used for tapeworm infestation. While the medication has not been approved for use in Japan, clinical tests are progressing overseas.

Another possible candidate found in the computer simulations was Nitazoxanide, which is used to treat parasitic infestations.

While no further details were released about other medications regarded as strong candidates, the team did find several for which Japanese pharmaceutical companies hold the patents.

The results of the computer simulations will be passed on to those companies so they can do tests to assess the actual effectiveness against the novel coronavirus.

The team plans to continue computer simulations to gauge the effectiveness of medications in inhibiting other proteins that make up the novel coronavirus.

“We were surprised to find medications used in clinical tests overseas ranking high after we conducted calculations without prior knowledge about the effectiveness of the treatments," said Yasushi Okuno, a professor in the department of biomedical data intelligence at Kyoto University who headed the team that used the Fugaku supercomputer in the simulation.

"We believe that we have produced promising results," he added. "We hope further experiments will verify the results.”

Fugaku was jointly developed by Riken, a government-affiliated research institute, and computer maker Fujitsu Ltd., as the successor to K, once the world’s most powerful supercomputer.

Riken is planning full operations of the supercomputer in fiscal 2021.

Fugaku ranked No. 1 in the world on June 22 in calculation speed.

Experiments using the Fugaku began from April for research into the novel coronavirus.