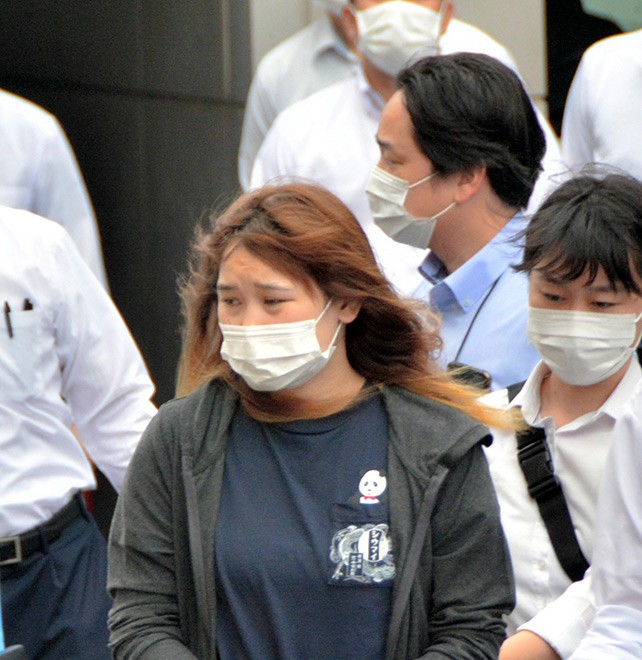 Saki Kakehashi is taken to the Kamata Police Station in Tokyo on July 7. (Nobuyuki Takiguchi)

A Tokyo woman was arrested after staying with her boyfriend in Kyushu for eight days while her 3-year-old daughter died alone and malnourished at their home in the capital, police said July 7.

Saki Kakehashi, 24, is accused of negligence as a guardian resulting in the death of daughter Noa last month.

Kakehashi, who works at an “izakaya” Japanese-style pub, admitted to the allegations.

“I didn’t expect that she would die,” police quoted her as saying.

According to the police, Kakehashi and Noa had lived by themselves at an apartment in Tokyo’s Ota Ward.

Investigators found that Kakehashi traveled to Kagoshima Prefecture on June 5 to see her boyfriend, leaving Noa alone at home.

After returning to Tokyo on June 13, Kakehashi made an emergency call at 3:55 p.m., saying, “My daughter is not breathing.”

Noa was pronounced dead after being taken to a hospital. She died from hunger and severe dehydration.

An autopsy showed the child’s stomach was nearly empty. She did not appear overly thin and had no visible wounds.

But she had suffered a rash on her bottom, likely from wearing dirty diapers for a long time.

Kakehashi initially said in voluntary questioning: “My daughter’s condition worsened a few days before my emergency call. She just ate a little bit of rice porridge. She laid down and suffered from repeated coughing.”

Investigators found no reports or consultations with child welfare offices that indicated the girl had been abused.

Kakehashi had been married to Noa’s father but they divorced.

Three years ago, Kakehashi moved to the current apartment and has been working at the izakaya. Noa used to go to a day care center but stopped more than a year ago.

Kakehashi continued to work while her daughter remained at home alone.

After her shifts, Kakehashi sometimes played pachinko or ate and drank with her friends until early the next morning. She also stayed for three days in Kagoshima Prefecture in May, according to the investigation.

A man in his 70s who lives in the same apartment building said, “I have never seen them together, and I didn’t see her daughter even once this year.”