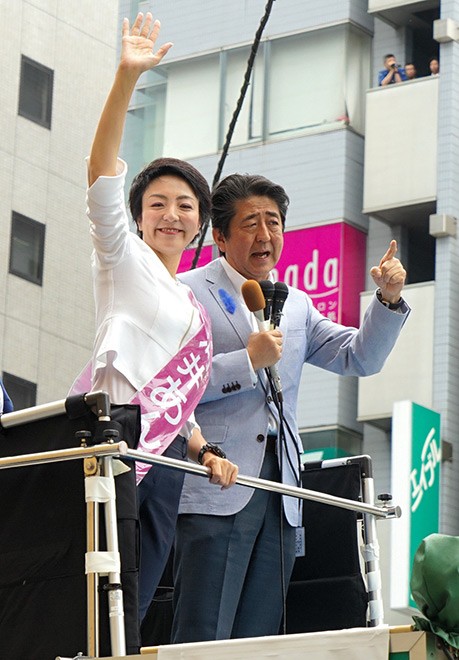 Prosecutors face the difficult task of proving in court that a former justice minister’s cash handouts that started four months before the 2019 Upper House election were intended to buy votes for his wife.

Katsuyuki Kawai, 57, was indicted on July 8 on vote-buying charges along with his wife, Anri, 46, who won her first term in that Upper House election. They are believed to have distributed around 29 million yen ($270,000).

Katsuyuki is the first former justice minister in the postwar era to be indicted, according to Justice Ministry officials.

The Kawais have repeatedly denied any wrongdoing.

Prosecutors have been told by some of those who received the money that Katsuyuki asked them to round up votes for Anri’s election campaign, according to sources. Other recipients have said the purpose of the cash was not related to that election.

Most vote-buying cases have involved payments several weeks before and after the actual election campaign.

But in the indictments against the Kawais, prosecutors went back to March 2019, shortly after Anri announced she was running in the summer’s Upper House election.

To gain a conviction, prosecutors will have to prove that money distributed as far back as March 2019 was used for vote-buying rather than other political activities by Katsuyuki.

A lawyer who was once a prosecutor said such cases are rarely filed because of the difficulty in differentiating what the money was intended for since it was distributed so far ahead of the actual campaign.

A veteran lawmaker of the ruling Liberal Democratic Party said: “The general feeling we hold is that money given more than a month before a campaign does not represent an attempt at vote-buying. It is a stretch to go back three or four months from the election. I hold doubts about how prosecutors decided to differentiate the cash payments.”

The money went to 100 local assembly members and others in Hiroshima Prefecture with ties to Katsuyuki.

Prefectural and municipal assembly elections were held in Hiroshima Prefecture in March and April 2019. Those who received money from Katsuyuki said he told them the money was to help their own campaigns as well as to congratulate them on winning a seat.

However, based on what the 94 individuals who were listed in connection with the June 18 arrests of the Kawais said, the amounts handed out did increase just before the official start of the Upper House election campaign.

In March, Katsuyuki handed out 4.7 million yen, followed by 5.9 million yen in April. But in June, the amount increased to 8.26 million yen.

Although half of those who received money in June were connected to Katsuyuki’s own support group, the total amount given to local politicians in that month was 5.75 million yen.

Katsuyuki has also explained that the payments were intended to solidify his own political base, the No. 3 Lower House district in Hiroshima Prefecture. He gave out 5.4 million yen to 21 politicians, including mayors, who represented constituencies in the No. 3 district.

In contrast, the amount given to those outside of his political base reached 13.6 million yen, and that money was given to 29 local politicians.

Moreover, many local politicians who were given Katsuyuki’s money in connection with their elections in spring had never before received payments from him.

After the indictments against the couple, Abe on July 8 told reporters that he accepted responsibility for appointing Katsuyuki as justice minister in September 2019. Katsuyuki stepped down after reports surfaced about questionable payments to members of Anri’s campaign staff.

“The LDP must also fulfill its responsibility of explaining what happened to the public,” Abe said.

But Abe failed to explain why he, along with Suga, appeared in person to campaign on behalf of Anri.

One of the things the LDP will have to explain is why it gave Anri’s campaign a total of 150 million yen before the Upper House election, about 10 times what is normally given to an LDP candidate.

Katsuyuki has denied that the payments he distributed came from the funds handed out by LDP headquarters.