Experts criticize decision not to indict recipients of Kawais’ cash 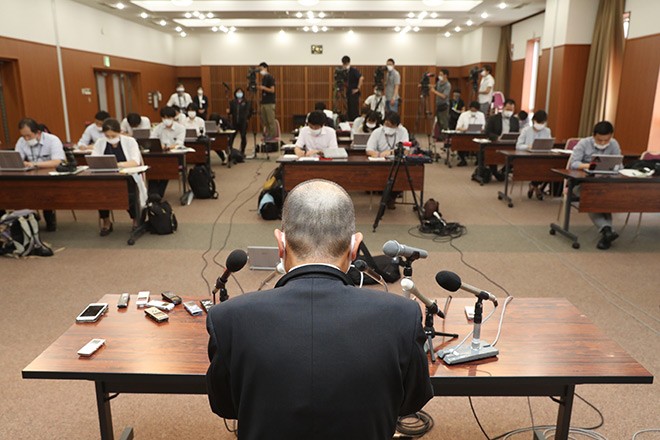 Hiroshi Kodama, mayor of Akitakata in Hiroshima Prefecture, admits to receiving cash from former Justice Minister Katsuyuki Kawai at a news conference on June 26. He shaved his head to show his contrition. (Koichi Ueda)

Legal experts and investigators are criticizing Tokyo prosecutors for letting around 100 recipients of suspected vote-buying payments off the hook in a scandal that has rocked both national and local politics.

They are suspected of distributing a total of about 29 million yen ($270,000) to local assembly members, municipal leaders and others in Hiroshima Prefecture.

But prosecutors did not file criminal charges against those who have admitted that they accepted the money from the Kawais.

Hiroshi Ichikawa, deputy head of the special investigation squad of the Tokyo District Public Prosecutors Office, declined to elaborate on why the cash recipients are not being prosecuted.

“We would rather not to discuss it because it is related to details of our investigation,” he said. “We have indicted people who should be indicted.”

Citizens can ask prosecution inquest committees to overturn prosecutors’ decisions to drop an investigation, but charges must have already been filed against the suspects in such cases. So citizens do not have this option concerning the recipients in Hiroshima Prefecture.

Under the Public Offices Election Law, people who receive cash handouts or goods knowing that the gifts are for vote-gathering purposes are subject to criminal punishment.

Even if the cash or gifts are returned, the initial acceptance can still be considered a criminal act.

One experienced prosecutor said the decision not to indict the recipients of the Kawais’ cash deviates from the norm in bribery cases of prosecuting the receiving side as well.

“In general, people who received up to 50,000 yen ($463) in bribes involving cash will be slapped with a fine,” the prosecutor said. “For those who received more than that sum, prosecutors will file a demand for a trial.”

According to the investigation into the Kawais, prefectural and municipal assembly members received various sums, ranging from 100,000 yen to millions of yen.

The payments were made before Anri won her first Diet seat in the Upper House election in summer last year.

Another prosecutor questioned the Tokyo District Public Prosecutors Office’s decision not to indict, saying it could be taken as a calculated move to strengthen the case against the lawmaking couple.

“Local assembly members are also politicians,” the prosecutor said. “It could lead to speculation that prosecutors may have made a deal with them.”

Katsuyuki, a well-connected Lower House member, is believed to have forced many of those local politicians to accept the cash.

The now-sprawling vote-buying scandal has thrown political circles in Hiroshima Prefecture into disarray. Some municipal government leaders resigned after admitting to receiving the money.

A senior official at the Tokyo District Public Prosecutors Office suggested that consideration of the state of Hiroshima politics was partly behind the decision not to charge the local leaders.

“There is no denying that the consequences for the political community of Hiroshima Prefecture were taken into account,” the official said.

But Yasuyuki Takai, a lawyer who formerly served as a prosecutor, took issue with the office’s judgment.

“In criminal punishments, a guiding principle is clarity in procedures,” he said. “It would be reasonable for prosecutors to arrest (the recipients) and then decide not to indict them.”

Takai also said prosecutors should explain why they will not prosecute elected officials, given the impact of the scandal on politics in Hiroshima Prefecture.

“Prosecutors must be worried that providing an explanation for not charging them might be used as the standard for deciding whether to prosecute future cases,” he said.