A South Korean drama that may yet alter hearts, minds of North 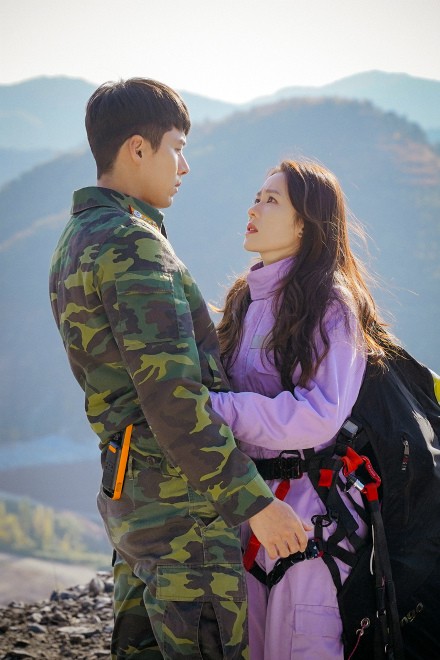 A scene from “Crash Landing on You” (Provided by tvN)

"Crash Landing on You” has taken South Korea, as well as Japan, by storm as it sensitively portrays a love affair between a man from the North and a woman from the South. It also depicts “daily life” in the reclusive nation based on accounts of those who fled.

The sprinkling of North Korean defectors living in South Korea who have watched the drama series unfold say it offers hope for the future, especially if copies make their way across the border.

Two defectors, one of whom plays a role in the drama, offered their take on the realities of life for North Korea's 25 million citizens during recent interviews.

In “Crash Landing on You,” a woman from a wealthy South Korean conglomerate family crash-lands in North Korea in a paragliding accident, and promptly falls in love with a commissioned officer of Pyongyang’s military.

The story may appear absurd, but it struck a chord with South Korean viewers impressed by the attention to detail in portraying daily life in the North.

Yun Seol Mi, a defector who arrived in the South via China in 2014 and now lives in suburban Seoul, plays the role of a woman playing an accordion on a North Korean train.

“There are some factors that can never be found in North Korea, but overall the details of daily existence there were so finely recreated that I got goose bumps,” said Yun, 34.

Noting that a canned drink called “sweet water” is offered in one scene, Yun said a member of the film crew told her that staff members had “obtained the actual beverage from somewhere.”

In another scene, the commissioned officer who plays the protagonist's love interest scouts a bustling open-air market to purchase an aromatic candle.

Yun explained the background for the scene.

“There is a saying that ‘everything except cat horns is available at markets’ in North Korea,” she said. “Cat horns are, of course, imaginary objects, so the metaphor refers to the fact that just about everything else can be found.”

Even cellphones are available, according to Yun, who said they are called “son jeonhwa” (hand phone) in the North.

Born in Rason, in a northeastern province of North Korea, Yun's father served as a senior local official in the ruling Workers' Party of Korea.

“We had a Hitachi-made refrigerator and a Sony TV set at home,” Yun recalled. “My family were part of the local elite.”

She said the fridge doubled as a bookshelf due to frequent power outages, which feature in “Crash Landing on You.”

Yun seems to have adjusted comfortably to living in the capitalist South, and recalled the time she enjoyed watching another drama, “My Lovely Sam-soon,” which became a nationwide sensation in South Korea in 2005, while she was in North Korea, even though the country prohibits the airing of dramas from the South.

“My Lovely Sam-soon” stars Hyun Bin, who also plays the role of the military officer in “Crash Landing on You,” and Yun quickly became a fan of the actor. She met Hyun on set during filming.

“I could not imagine that would ever happen when I lived in North Korea,” Yun said. “It felt really odd.”

Scenes featuring the North from “Crash Landing on You” mainly show Pyongyang and a village near Kaesong around the heavily fortified demilitarized zone separating the two countries.

Life in the countryside is portrayed in a rustic manner, triggering criticism in the South that it “excessively glamorized” the harsh reality of life in North Korea.

The drama also exposes the wide economic disparities between those living in Pyongyang and local areas. A woman in her 20s who was raised in Pyongyang provided an overview of the situation to The Asahi Shimbun.

The daughter of a doctor, she fled to South Korea in 2017. As public servants in the socialist state, physicians are known for taking bribes from patients. But her father never engaged in such underhand behavior, she said.

While mobilized for labor at a farming village, the woman heard a classmate speaking clandestinely with his father over the phone and describing the work as “too tough” and “unendurable.”

The following day, a fattened hog arrived in the rural community, apparently a gift from the man's father, a senior official of the ruling Workers' Party of Korea, and the classmate was suddenly whisked home to Pyongyang.

“I envied him,” the woman recalled. “My family was in a lower class in Pyongyang.”

What surprised the defector when she met others who had escaped from the North after moving to the South was that most of them were from rural regions and had endured an unbelievably miserable existence.

“I now appreciate the state (North Korea),” she said. “I received so many benefits simply because I was born and raised in Pyongyang.”

Yoon Ji-hyun, a professor of food service policy and nutrition marketing at Seoul National University who studies daily life in North Korea based on accounts from defectors, noted that a drama series can never hope to portray every facet of reality, no matter how faithfully they are created.

Yoon said she will continue her research in preparation for possible reunification of the Korean Peninsula, although she conceded there is little prospect of that happening in the current climate of mutual suspicion.

She said political initiatives are needed to achieve unification in the political and economic fields, adding that reuniting the North and the South after a nearly 70-year divide would pose a major, but not necessarily impossible challenge, given that both sides are "now rediscovering” each other through dramas.

“Genuine reunification will be achieved only when our lifestyle cultures are consolidated,” said Yoon.

Although 35,000 North Korean defectors live in the South, which has a population of 52 million, discrimination against them remains rampant, due to the decades of separation between North and South and a gaping economic discrepancy.

Despite the enduring popularity of the drama series in South Korea and persistent discrimination against those who fled North Korea to settle in the South, Yun offered some sage advice.

“North Korea is not something that can be accepted if it tastes sweet and rejected if it tastes bitter,” she said. “If there really is a strong will to pursue reunification, our citizens must accept the fact it carries a bitter taste.”

According to Yun, North Koreans are often moved by South Korean dramas but at the same time harbor an “an abject sense of dread that they will face discrimination if they manage to flee to the capitalist South.”

Yun also said her views about South Korea changed somewhat after getting in contact with a North Korean friend who had been avidly watching each episode of “Crash Landing on You.”

“It was the first drama I ever watched in which a man and woman from the North and South fall in love with one another,” Yun said. “If North Koreans get the opportunity to watch it, they may well feel confident about being able to communicate with South Koreans once reunification happens, just like in the drama.”