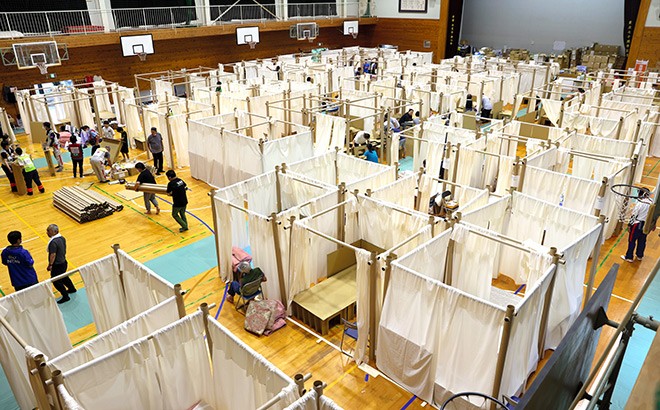 Partitions are set up to provide some privacy for residents who evacuated to a junior high school gym in Hitoyoshi, Kumamoto Prefecture, on July 9. Up to 124 people from 61 households in Kuma and elsewhere are taking refuge there. (Jun Kaneko)

Heavy downpours that caused dozens of deaths on the main island of Kyushu will continue in wide areas of western and eastern Japan at least through July 12, the Japan Meteorological Agency said.

The seasonal rain front is projected to remain stationary and will likely dump torrential rain on many parts of the country, leading to possible flooding and landslides.

“It would not be surprising to see a disaster strike anywhere in the country,” the agency said.

Rainfall amounts forecast over 24 hours through 6 a.m. on July 11 are: up to 300 millimeters in northern Kyushu; 250 mm in the Shikoku region; 150 mm in southern Kyushu and the Tokai region; 120 mm in the Chugoku, Kanto and Koshin regions; 100 mm in the Hokuriku region; and 80 mm in the Tohoku and Kinki regions.

Five rainfall-related deaths were confirmed in Kyushu on July 9, bringing the death tolls to 59 in Kumamoto Prefecture, two in Fukuoka Prefecture, and one in Oita Prefecture.

The government’s Fire and Disaster Management Agency said 4,746 houses were damaged in the torrential rain as of noon on July 9, most of them in Fukuoka Prefecture.

In Gifu Prefecture in central Japan, 3,164 houses were cut off from the outside by heavy rain and flooding.