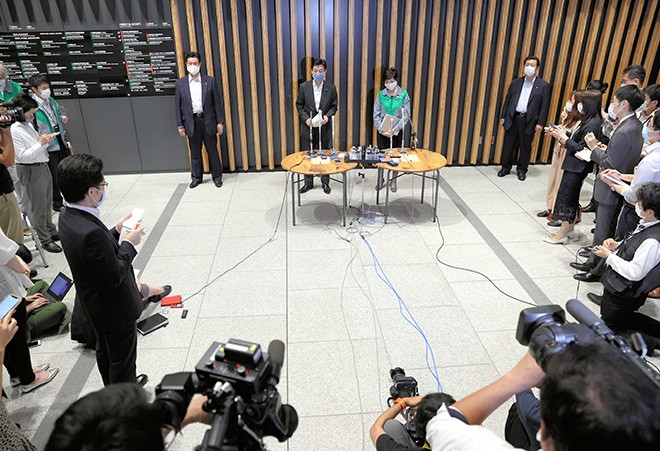 However, the positive tests show that the novel coronavirus has spread in other areas, such as schools and day-care centers.

The Tokyo metropolitan government’s panel of experts met on July 9 and presented an analysis about the daily average of 108 new COVID-19 cases over the week until July 8.

The analysis showed that infections were slowly spreading from known hotspots for the virus to surrounding areas, including nursing care facilities, kindergartens and day care centers.

The confirmation of novel coronavirus infections among elementary school pupils as well as staff and children at day care centers has led to mass testing at some of those facilities.

“The figure is one that raises a red flag about the possible spreading of community infections,” the official said. “The increase in infections after more tests were administered is a sign of the latent number of infections in the community.”

Another troubling sign, according to Satoshi Kutsuna, a doctor at the National Center for Global Health and Medicine, is the increase since late June of untraceable infections among young people in Shinjuku Ward.

“That could mean that infection clusters are spreading not only in nighttime entertainment districts within Shinjuku but also through coffee shops and ‘izakaya’ pub-style restaurants,” Kutsuna said.

Although hospitals still have more than enough beds to care for new COVID-19 patients, those beds would quickly fill up if infections keep spreading at the current pace, he said.

Measures must be immediately taken to stop the further spread of the coronavirus, Kutsuna warned.

According to the experts’ panel, the total number of those hospitalized for COVID-19 in Tokyo was 444, including six in serious condition, as of July 8, compared with 271 the previous week.

The experts also said the daily average of polymerase chain reaction (PCR) tests for the novel coronavirus was around 2,300 for the week ending on July 8, up by about 600 from late June.

The rate of positive test results is nowhere near the 30 percent or so recorded in April when adequate testing was unavailable. But the daily average of positive tests for the week ending July 8 was 5.6 percent, double the 2.8 percent of two weeks earlier.

One reason for the increase in infections is the still-large ratio of untraceable infection routes.

While about 70 percent of new cases in April were untraceable, the figure now is between 40 and 50 percent.

About 70 percent of new infections are among those between 20 and 40 who tend to show little or no symptoms. Those individuals may be spreading the coronavirus without realizing they are infected.

Tokyo metropolitan government officials have continued to insist that new infections are concentrated among young people and workers in specific business sectors, such as bars where staff are in close contact with customers.

But Tetsuya Sakamoto, the head of Teikyo University Hospital who is a member of the experts’ panel, said, “There are signs that infections are spreading to middle-aged and older individuals who are likely to develop more serious symptoms.”

In the week until July 8, 86 individuals in their 40s were confirmed infected, compared with 48 in the previous week.

Governors and mayors of other areas were expressing concerns about the surge in cases in Tokyo after the metropolitan government eased restrictions on business operations and movement by the public.

“The spread of infections will not be confined only to young people,” he said.

Ehime Governor Tokihiro Nakamura questioned whether the central and Tokyo metropolitan governments were on the same page about travel crossing prefectural borders.

Koike had urged Tokyo residents to refrain from nonessential travel to other prefectures.

However, central government officials have said there was no need for such requests.