Tokyo’s rush back to business generating alarm at local levels 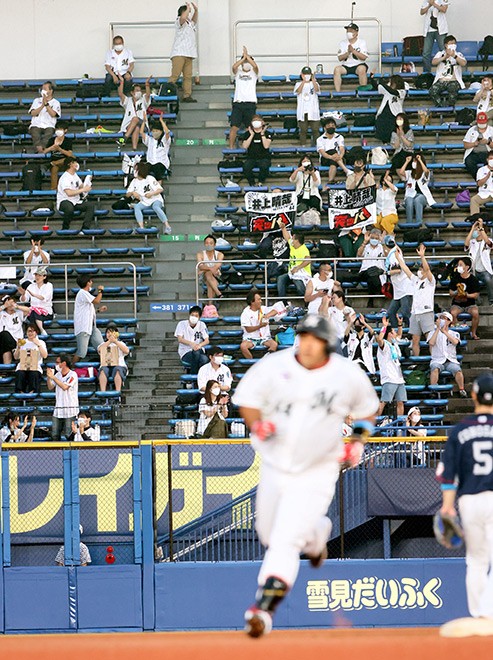 Lotte Marines fans allowed into Zozo Marine Stadium for the first time this season cheer Seiya Inoue after he hit a three-run home run in the July 10 game against the Seibu Lions. (Tsubasa Setoguchi)

The central government moved to further relax restrictions on business activities despite a worrying spike in new coronavirus infections in Tokyo and fears it heralds a second wave in the health crisis.

The policy decision is at odds with steps being taken by authorities in other prefectures who have expressed growing concern about the steady rise in COVID-19 infections, not only in their jurisdictions, but especially in Tokyo.

It also comes as a doctors’ association in Tokyo called on the government to request business closures in selected areas.

Although Tokyo posted its second straight day of record new infections on July 10, the central government went ahead with its plans to further relax curbs on attendance at large events and also announced that a travel subsidy program would begin a few weeks earlier than initially planned.

Prefectural governors meeting among themselves, and with Yasutoshi Nishimura, the state minister in charge of economic revitalization who also serves as point man for the government’s efforts to deal with the novel coronavirus pandemic, asked that the central government adopt sterner steps to prevent a further spread of the virus.

The Tokyo Medical Association also held a news conference on July 10 at which it pleaded with the central government to use its authority to order certain business sectors that have seen infection clusters to shut down.

Among the record 243 new infections in the capital on July 10, 77 percent were among individuals between the ages of 20 and 40.

Tokyo metropolitan government officials also said that a stage performance in the capital's Shinjuku Ward held between June 30 and July 5 likely led to the infections of at least 14 people, including performers and audience members.

The prefectural government of Tochigi located northeast of Tokyo announced the same day that a local resident who attended the stage performance had been confirmed with COVID-19.

These and other developments led the governors of Tokyo and the three neighboring prefectures of Chiba, Saitama and Kanagawa to huddle in a video conference during which they confirmed that a common trend in all their jurisdictions was that the increase in infections was concentrated in younger people as well as from bars where staff were in close contact with customers.

The four governors issued a joint statement calling on local residents to be more circumspect when they go out and act in ways that prevent them from becoming infected or infecting others by, for example, only visiting business establishments that had thoroughly implemented measures to prevent a further spread of infections.

Saitama Governor Motohiro Ono indicated that he had issued a request to senior citizens and those with pre-existing health conditions to refrain from nonessential trips to Tokyo.

He also expressed fears that infections could quickly spread throughout the nation, given that young people have a wider geographic range of activity.

The National Governors’ Association exchanged views with Nishimura on July 10 and asked that legislation be passed that would allow for expedient measures to name bars and restaurants where customers became infected as well as order such businesses to temporarily stop operations.

Nishimura later met with Tokyo Governor Yuriko Koike and Shigeru Omi, an infectious diseases expert who heads a government panel dealing with the pandemic, to discuss what could be done.

At a news conference, Nishimura said three areas where attention would be focused were to expand polymerase chain reaction (PCR) tests in a strategic manner in areas that have seen a spike in new infections; to thoroughly implement guidelines established for businesses where staff are in close contact with customers; and to strengthen the functioning of public health offices.

At his July 10 news conference, Haruo Ozaki, head of the Tokyo Medical Association, said while he understood the central government’s concern about stalled economic activity, he urged it to establish unified measures rather than leave everything up to prefectural governments.

Among the steps he requested were designating specific areas where businesses would be asked to temporarily close in exchange for government subsidies as well as strengthening the PCR test structure.

Pointing to an increase in infections in the wards of Nakano and Suginami that are close to Shinjuku Ward, Ozaki said infections were being spread in the community by those who visited entertainment areas in Shinjuku and then made their way home to neighboring districts.

But despite such calls, the central government went ahead on July 10 to relax restrictions on large events. The limit of 1,000 people in attendance at concerts or exhibitions or 50 percent of the capacity of the venue was raised to 5,000, or 50 percent of capacity.

Professional baseball and soccer events that had been held without fans in the stands started from July 10 to allow a maximum of 5,000 spectators into the stadium.

Tourism minister Kazuyoshi Akaba announced the same day that the government’s “Go To Travel” subsidy program, in which half of the cost of a domestic trip would be covered, would go into effect from July 22 rather than early August as initially planned.