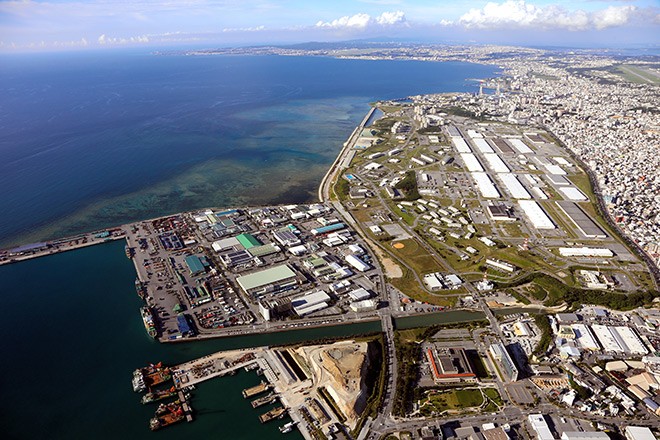 NAHA--Okinawa Governor Denny Tamaki expressed anger and concern on July 11 after being notified by the U.S. military that 45 military personnel stationed in his southernmost prefecture had tested positive for COVID-19.

The service members were based at U.S. Marine Corps Air Station Futenma in Ginowan and Camp Hansen in the central part of the main Okinawa island. The total over a six-day period increased to 62 infections, with the reporting of an additional case on July 12 at the Makiminato Service Area (Camp Kinser).

“It is extremely regrettable that there have been a large number of infections among those connected with the U.S. military over a short period of time when the Okinawa prefectural government and the public were working together to prevent further infections,” Tamaki said.

The Okinawa governor met with reporters on July 11 after a prefectural government task force meeting to respond to the novel coronavirus pandemic.

“We are dealing with this with the sense of concern that a second wave has hit,” Tamaki said.

He also criticized the U.S. military, saying he held grave doubts over whether it took adequate measures to prevent a further spread of the coronavirus.

Okinawa has confirmed a total of 153 COVID-19 infections as of July 11.

While there were scattered reports of infections among U.S. military personnel in the four-day period until July 10, the figure jumped to 62 when the report was presented the following day to Okinawa prefectural officials, along with one infection reported on July 12.

The U.S. military informed Okinawa officials that both Futenma and Camp Hansen had been placed in lockdown.

However, even more frustrating for prefectural government officials is the refusal of the U.S. military to divulge specific details about those who were infected.

Because of that contact between Okinawa residents and U.S. military personnel, prefectural government officials were concerned that some of those Okinawans may have been exposed to the coronavirus.

Not only has the U.S. military refused to report where the infected personnel worked or visited, it also initially asked the Okinawa officials not to disclose the reports of infections that it submitted. That was in line with general U.S. Defense Department guidelines that call for nondisclosure of information that could affect daily military operations.

Prefectural government officials initially went along with that request because they felt they would receive no information at all if they released the information given about the infections.

But after the prefectural government received the report about the large increase in new infections, Tamaki spoke by phone with Lt. Gen. H. Stacy Clardy III, the commander of III Marine Expeditionary Force, who is the top military officer for the Okinawa region.

According to prefectural government officials, Clardy told Tamaki that the U.S. military would not interfere if Okinawa officials decided to release information about infections among U.S. military personnel.

But local government officials and residents in Okinawa had already suspected that infections would spike among U.S. military personnel because of recent large Fourth of July parties. Local sources said some of the gatherings held within U.S. bases involved thousands of people and there were also parties outside of the bases where several hundreds of people, including Japanese, attended.

There are many U.S. facilities concentrated in the central part of the main Okinawa island, including the town of Chatan.

Chatan Mayor Masaharu Noguni said that he had been worried about a sudden spike of infections because he saw many U.S. military service members wandering around outside the bases on the Fourth of July.

“We have raised the level of warning because we believe that infections are already spreading within our community,” Noguni said.

Although the United States is one of many nations subject to entry restrictions by the Japanese government, U.S. military personnel are exempt under the Japan-U.S. Status of Forces Agreement. The U.S. military has rented a hotel in Chatan to quarantine personnel who have recently entered Okinawa.

But details, such as how many personnel are being housed there temporarily, have not yet been passed on to the town government.

A woman in her 60s residing in the central part of the main island expressed concerns about a spread of infections since many U.S. service members walk around outside bases without wearing face masks.

(This article was written by Shinichi Fujiwara, Mika Kuniyoshi and Tomoko Takaki.)