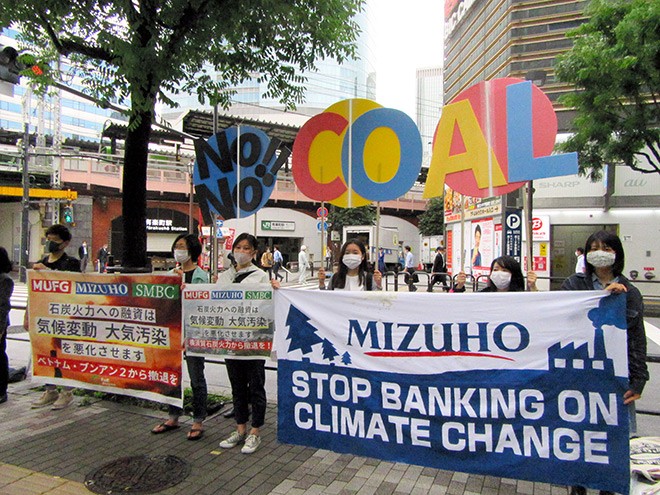 Environmentalists call on Mizuho Financial Group Inc. to stop financing coal-fired power projects outside the venue of an annual meeting of its shareholders in Tokyo in June. (Asahi Shimbun file photo)

The government has decided to toughen its requirements for providing official assistance to exports of coal-fired power plants, as international criticism finally pushed Tokyo toward a policy change.

The option of official export support, however, has been left open, so it could hardly be said that Japan has joined the global trend for moving away from coal-fired power.

Japan should withdraw promptly from coal-fired plant exports, given the growing threat of the global climate crisis.

That is because the global community has set the target of achieving zero greenhouse gas emissions on a net basis in the second half of this century under the Paris Agreement on measures against global warming.

But Japan still continues to define coal-fired power as one of its baseload power sources. It is also the only Group of Seven member nation whose government continues to push exports of coal-burning plant projects.

Certainly, Japan has set four requirements that must be met for official export support to be given, including one that says there should be a request from the recipient nation for Japan’s highly efficient power generation facilities. But there remains strong criticism that Japan is reluctant to take measures to address the climate crisis.

Backlash of that kind has pushed the Environment Ministry, the industry ministry and other government bodies into the latest review of the government’s requirements for providing support.

The government has set a new basic policy of calling on the recipient nations to move toward a carbon-free society in exchange for such support, including by helping them develop long-term strategies for reducing greenhouse gas emissions.

The corresponding policy document says explicitly that no support, in principle, will be given to exports of coal-fired power plants to nations if details of their decarbonization policies remain unclear. The four requirements will also be tightened, from the standpoint of decarbonization.

The government is rightly reviewing its previous stance of supporting coal-fired plant exports as part of Japan’s growth strategy, shifting its focus to the environment.

It should not be overlooked, however, that the government still says exports of high-efficiency facilities are OK if the recipient country is seeking Japan’s coal-fired power generation technologies during the course of its transition to a carbon-free society.

A coal-fired plant, however efficient, still emits twice as much CO2 as a thermal plant fired by natural gas. It is inconsistent of the government to say it will call on recipient nations to take measures against climate change while at the same time helping exports of facilities that will continue to emit greenhouse gases for as long as 40 years.

The government should instead be promoting exports of solar and wind power technologies.

Major financial institutions around the world, including Japan’s megabanks, are pulling out of investments and loans to coal-fired power projects. Tokyo should be criticized for hindering measures against the climate crisis as long as it leaves official export support an open option.

Coal-fired power plants could cause problems, apart from global warming, to their host nations.

In parts of Southeast Asia, residents of the host sites of power plants that Japan is helping to build are campaigning against the projects for fear of their adverse impact on farming and fishing as well as environmental pollution.

Japan’s assistance should not end up harming local communities.

The government should withdraw totally from providing support to coal-fired plant exports, instead of just toughening its requirements for doing so.