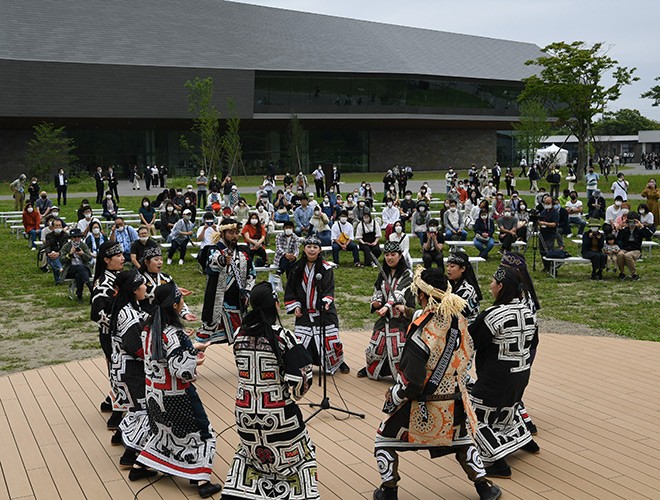 A traditional Ainu dance is performed on an outdoor stage to mark the opening of the National Ainu Museum and Park (Upopoy) in Shiraoi, Hokkaido, on July 12. (Kengo Hiyoshi)

SHIRAOI, Hokkaido--Japan's first national facility devoted to the indigenous Ainu ethnic minority of Hokkaido celebrated its delayed opening to the public on July 12.

Staff of the National Ainu Museum and Park here greeted visitors with “Irankarapte” (Hello) in the Ainu language.

From early in the morning, 300 or so people formed a line in front of the complex, also known as “Upopoy,” or “singing together” in the Ainu language.

The facility's opening was postponed twice due to the COVID-19 pandemic and came two and a half months behind schedule.

Visitor numbers will be limited to 2,000 per day for the time being.

“The Ainu people have the spirit of tolerance,” Tadashi Kato, executive director of the Ainu Association of Hokkaido, said at the opening ceremony. “Upopoy was completed through dialogue and interactions.”

Popular actor Takashi Ukaji, a public relations ambassador of the complex, said, “I hope the facility will help people learn about the Ainu’s rich history and hardships they faced and spread the spirit of kindness and mutual respect to the world.”

The complex comprises a museum, a park and a memorial. With a goal of drawing one million visitors to the facility annually, the government views it as a base for reviving and developing the Ainu culture, which, along with their language, was at the risk of extinction due to a policy of assimilation that started in the Meiji Era (1868-1912).

The Ainu faced decades of discrimination and were reduced to living in poverty after the government in Tokyo forcibly seized control of the main northern island of Hokkaido in the 19th century.