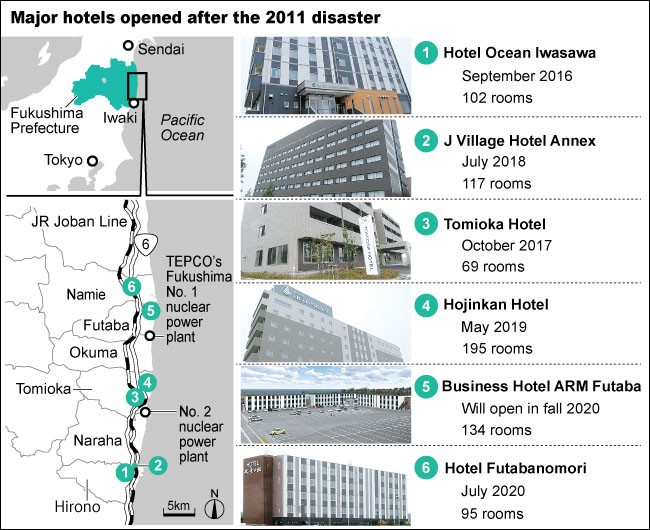 Areas close to the site of the 2011 Fukushima nuclear disaster might seem like the least likely prospect for a hotel construction boom, but as the region slowly begins to recover, demand for places to stay is at a premium.

Hotel operators are not expecting to cater to people with a morbid fascination for the facility that went into a triple meltdown following the magnitude-9.0 Great East Japan Earthquake and tsunami, but to accommodate those involved in reconstruction projects, and later, business travelers and other visitors.

Coastal areas of Fukushima Prefecture were the first to experience a rush in new hotel construction, mainly facilities offering 100 or so rooms.

This fall, the wave of hotel openings will even extend to Futaba, a town that hosts the Fukushima No. 1 nuclear power plant operated by Tokyo Electric Power Co.

Over the past nine years since the disaster at the Fukushima No. 1 nuclear power plant, hotels have mostly been occupied by construction workers.

However, hotel operators are expecting a more diverse clientele to develop in the future.

Hotel Futabanomori, located in the town of Namie about nine kilometers north of the crippled Fukushima No. 1 nuclear power plant, is expected to open on July 15.

It is situated not far from the No. 6 national road that rumbles for much of the day with heavy trucks going to and from construction sites.

An evacuation order was lifted in the central part of the town in March 2017. Currently about 1,400 people live there, which accounts for less than 10 percent of the pre-disaster population.

But new businesses are moving into the town. In March, top-level facilities for research and development of robots and hydrogen production were established in Namie as a part of a national project.

Takashi Shiga, the 47-year-old president of Hotel Futabanomori, said he hopes his hotel will create an opportunity for residents to “get together with relatives and old classmates who left their hometown and moved far away back to return to Namie.”

He also said he wanted the hotel to provide workers involved in reconstruction projects "with a sense of comfort.”

Prior to the disaster, towns near the nuclear power plants used to be dotted with small inns and hotels catering to beachgoers, surfers and workers at nuclear and thermal power plants.

After the disaster, residents within a 20-km radius of the Fukushima No. 1 nuclear power plant were ordered to evacuate.

Hirono town, located about 20 km south of the facility, offered the main venue for places to stay for workers involved in cleanup, decontamination and reconstruction projects.

“I received so many phone calls from workers desperately looking for a place to lie down and get some sleep,” said Minoru Yoshida, 64, who runs an inn called Iwasawaso in Hirono.

Yoshida evacuated to Tokyo temporarily immediately after the disaster. But within two months, he started taking in guests.

Parts of Iwasawaso were damaged by the earthquake, but Yoshida opened his own home, which was adjacent to the inn and emerged unscathed, to let guests stay.

He also turned a banquet room in the inn into a space for workers to spend the night.

In 2016, Yoshida built a business hotel with 102 rooms, Hotel Ocean Iwasawa, nearby.

An average of 150 to 200 guests stay at his properties each day.

“This is my hometown. That’s why I want it to be rebuilt,” Yoshida said. “I wanted to help these people who came here to work for the rebuilding by letting them stay.”

In Futaba town, where the No. 1 nuclear power plant is located, a new business hotel with 134 rooms, “ARM Futaba,” is slated to open this fall.

In March, an evacuation order was lifted for 4.7 percent of the town.

A new museum dedicated to explaining the damage from the March 2011 disaster and the lessons learned from it is also slated to open in the town this fall.

Arm System, a Hokkaido-based company that manages the new hotel, hopes that evacuees from the town will stay at the property during temporary homecoming visits.

Industrial complexes are also under construction in the area.

“We expect strong demand from business travelers and museum visitors and foresee a sustainable business in the future,” a company representative said.

Tomioka town, about 10 km south of the nuclear power plant, along with surrounding areas, has witnessed a rise in new apartment buildings for single people and company dormitories since April 2017, when the evacuation order was lifted.

In October that year, Tomioka Hotel with 69 rooms was opened by eight residents who ran food and clothing stores in the town.

The hotel has maintained an average 70 percent occupancy rate since then. Most of the guests were engineers and businesspeople visiting the town for reconstruction projects from the Tokyo metropolitan area.

But Tsukasa Watanabe, the 61-year-old president of the hotel, admitted to "feeling nervous about the future,” citing the impact of the novel coronavirus pandemic that caused visits by business travelers to dry up.

The hotel has relied on a central government subsidy that supports two-thirds of a hotel construction fee, and other initiatives.

“But we can’t just continue to rely on such (support),” said Watanabe, who desperately feels the need to come up with a strategy to bolster his hotel's competitiveness.

Kota Kawasaki, an associate professor of town planning at Fukushima University, noted that the trend of hotel occupancy by construction workers had reached its peak more or less.

"Competition among hotels will increase from now on," he said. "Each hotel will have to devise more strategic management skills to stay in business.”