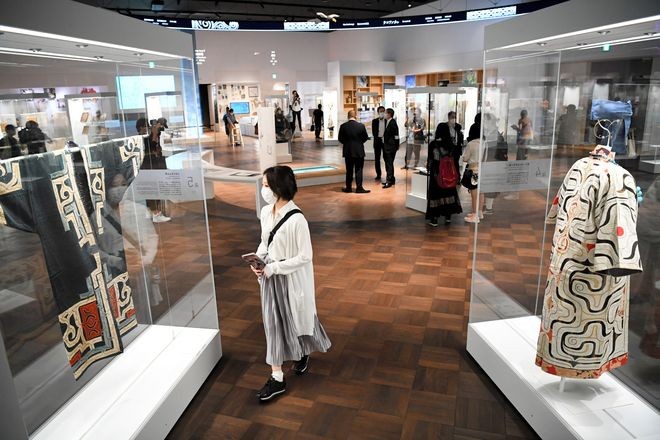 Visitors view exhibits at the National Ainu Museum and Park in Shiraoi, Hokkaido, on July 12. (The Asahi Shimbun)

He and his younger brother were sitting before a heater and chatting about their fishing plans for the next day, when their parents warned them, "Whatever you say before the goddess of fire will all be repeated to the fish, so you won't be able to catch any tomorrow."

In the Ainu language, the goddess of fire is Apehuchi Kamuy.

She is the subject of a wood sculpture Kaizawa was commissioned to create for display at the National Ainu Museum and Park (Upopoy), which opened to the public on July 12 in the town of Shiraoi.

"There are deities galore in the natural world of the Ainu culture," Kaizawa explained. "But the goddess of fire, in particular, passes on messages."

Kaizawa's sculpture of Apehuchi Kamuy, now on display at the museum, is modeled on his grandmother. Her face is framed by powerfully carved flames soaring to heaven and intricate Ainu patterns are seen between the flames.

A closer look also reveals tattoos around her mouth and on the back of her hands.

The government in the Meiji Era (1868-1912) aggressively pursued a policy of forced assimilation of the Ainu population, outlawing tattoos for women and earrings for men.

Ainu were also banned from engaging in their traditional livelihoods such as fishing and hunting, forbidden to speak their language at school and had their ancestors' remains dug up from their graves in the name of "research."

It was not until 2008 that the government finally bowed to international public opinion and acknowledged the Ainu as an "indigenous people."

The Upopoy national facility was established to revive the Ainu culture. But some are accusing the government of "promoting tourism at the expense of the Ainu people," while others are angry that the government has not done anything to restore their indigenous rights.

Kaizawa carved his Apehuchi Kamuy from elm bog wood believed to be more than 400 years old.

I pray that the magnificent Ainu culture, which has been in danger of being snuffed out for the last 150 years, will finally reignite and burn brightly.