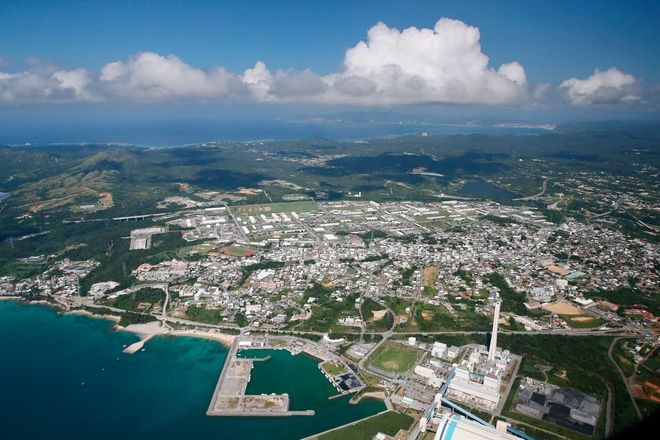 U.S. military bases in Okinawa Prefecture have been hit by an outbreak of COVID-19 cases, prompting the U.S. military to lock down two Marine Corps facilities.

Nearly 100 new cases of infection have been confirmed at Marine Corps Air Station Futenma in the city of Ginowan and Camp Hansen, another Marine Corps base in the town of Kin, which are now in lockdown.

The outbreak is raising concerns that the virus could spread to Japanese working in these facilities and to the local population.

The U.S. forces should respond to the concerns by taking all possible measures to prevent a further expansion of the outbreak and swiftly sharing information about the cases with the local authorities.

The United States has reported more confirmed COVID-19 cases and deaths than any other country and is on the Japanese government’s list of countries subject to denial of entry.

But U.S. troops can enter Japan directly via U.S. bases because they are not subject to Japanese law because of the bilateral Status of Forces Agreement (SOFA). Accordingly, they are not quarantined by Japanese authorities.

The U.S. forces in Japan have remained on alert, maintaining the coronavirus public health emergency imposed on all U.S. troops in the country even though the Japanese government has lifted a nationwide state of emergency.

But many U.S. military personnel took part in Independence Day parties held around July 4 in and outside bases. That suggests the U.S. forces in Japan are not acting on a careful and accurate awareness of the health hazard posed by the virus.

No wonder Okinawa Governor Denny Tamaki has expressed “strong doubts” about how the U.S. military is tackling this public health crisis.

Even more disturbing is the fact that the U.S. forces have not provided local authorities with sufficient information needed to make effective responses to the situation. The prefectural government has been informed of the numbers of newly confirmed cases, but not much information about the infected personnel’s recent activities and residences.

Tokyo and Washington have an agreement over such an outbreak of an infectious disease within U.S. bases. Under the agreement, the U.S. military’s medical institutions should report cases to local Japanese public health centers for cooperation to prevent the spread of the disease.

But it is left up to the U.S. military to decide on such specifics as when and what kind of information should be provided to Japan under this arrangement.

The way the U.S. military has handled the rash of infections has incurred the distrust of local communities.

The U.S. Department of Defense has a policy of not disclosing the number of COVID-19 cases for each base or unit to avoid any unwanted effects on military operations. In line with this policy, the U.S. forces have demanded that the numbers of newly confirmed cases in the bases in Okinawa provided to local public health centers not be published.

Chief Cabinet Secretary Yoshihide Suga stressed at a July 13 news conference that the central government has obtained the necessary information from the U.S. military, including what is needed for contact tracing.

But his claim is at odds with the prefecture’s perception. It is vital to establish a new system to ensure better communication concerning the matter between both sides, such as the special liaison council between the U.S. military and the prefectural government demanded by Tamaki.

This is by no means a problem confined to Okinawa. Local government officials in towns and cities in other prefectures that host U.S. military bases share similar concerns.

U.S. bases could become an information vacuum that gums up Japan’s border control efforts. This is a dire situation that should be avoided at any cost.

This requires the Japanese government to play a more active and high-profile role in responding to what is occurring within U.S. bases.

The government cannot fulfill its responsibility to protect people’s lives simply by communicating what the U.S. military says to the local government.