Fiery meteorite landed with a ‘bang’ in Chiba Prefecture 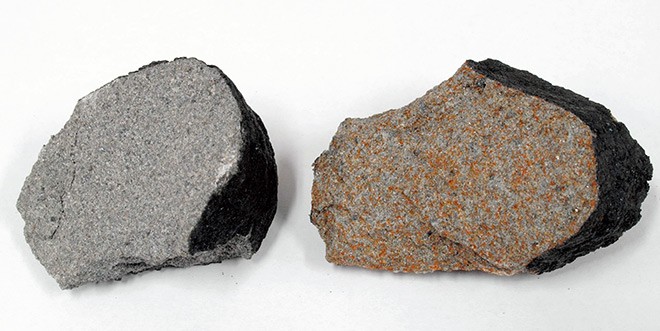 A meteorite was found cracked into two pieces in Chiba Prefecture. (The National Museum of Nature and Science)

Alarmed by a loud “bang,” a resident in Chiba Prefecture found two fragments of a meteorite that had provided a spectacular fireball show over the Kanto region, a museum said July 13.

The meteorite was seen blazing in the sky before dawn on July 2 and ended its space journey in the city of Narashino, according to the National Museum of Nature and Science.

The two pieces weigh 63 grams and 70 grams, and together their width is around 5 centimeters, the museum said.

The museum will submit an application to the Meteoritical Society to register it as the “Narashino meteorite.”

It was the first meteorite found in Japan in two years and the 53rd overall.

According to the museum’s announcement, an apartment dweller in Narashino heard the noise and found one fragment in front of the entrance door of the apartment on the morning of July 2.

The meteorite apparently split when it hit and damaged the handrail of the outside corridor.

Hearing about the fireball in the news and believing the piece might be a meteorite, the resident contacted the Natural History Museum and Institute, Chiba.

A search around the courtyard with the apartment caretaker led to the discovery of the second piece.

A group comprising amateur astronomers calculated the trajectory of the fireball based on video footage from an observation camera and predicted that it would have landed in northwest Chiba Prefecture.

According to the museum, the meteorite was the first found in Japan at a calculated trajectory point, a very rare occurrence in the world.

The museum detected radionuclide derived from cosmic rays in the two pieces and confirmed they were from the recent meteorite.