No stone left unturned in quest to probe all child deaths 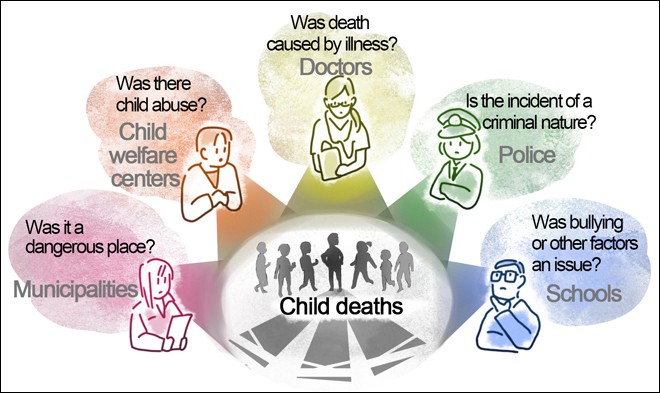 OTSU, Shiga Prefecture--A program developed in the United States and spearheaded here to collate all child deaths and verify their causes is to be adopted by seven prefectures to ensure authorities can step in before a tragedy occurs.

The Child Death Review (CDR), a database with background information on each child death, such as family environment and treatment in cases of illness, aims to prevent fatalities wherever possible.

Instances where children died from accidents, abuse, illness, suicide and other factors will also be tracked.

The system allows doctors, police, child welfare officials and other experts to verify causes of death from a wide range of perspectives so they can identify possible steps that could have been taken to prevent a disastrous outcome.

The model project will be adopted this fiscal year in seven prefectures: Gunma, Yamanashi, Mie, Shiga, Kyoto, Kagawa and Kochi.

If a child swallows a toy and suffocates to death, the system determines which administrative authority is best placed to investigate to decide whether the incident was preventable.

Until now, the police and child welfare centers investigated cases stemming from abuse, such as parental neglect.

Administrative departments investigated cases of children at kindergartens and day care centers who choked to death after swallowing toys.

They have been looking at each incident on a case-by-case basis.

Other fatal cases that did not draw much attention made it difficult to grasp a fuller picture.

“Of course, there is always the possibility that storage spaces for toys are in the wrong place at home," noted Masahito Hitosugi, a professor at Shiga University of Medical Science who specializes in social medicine. “The CDR system will help convey such problems more widely in society."

Hitosugi is also chairman of a prefectural council comprised of medical and investigative organizations to determine causes of child deaths.

In the United States where the CDR system was first introduced with resounding success, it was found that parents and siblings sleeping together with infants constituted risky behavior that should be discouraged.

Instances where an infant suffocated during the night often stemmed from family members clasping them too tightly or accidentally blocking the child's mouth when turning over in bed.

Baltimore city authorities in the eastern United States ran a campaign online and via medical institutions to “let infants sleep alone in their cots.” As a result, child deaths during sleep periods were cut by half over a six-year period, according to city officials.

Model projects will start in Shiga and the six other prefectures this fiscal year and run through fiscal 2022 as a prelude to implementing the CDR system nationwide.

Shiga Prefecture was chosen because the prefecture’s promotion council had already taken the lead in investigating the causes of all child deaths in its jurisdiction.

The council investigated the causes of death of 131 minors in the prefecture between 2015 and 2017 by checking copies of death certificates kept by health centers.

In 99 cases, the primary cause of death was illness, followed by 10 suicides and four due to traffic accidents. There were four cases of death by suffocation while the causes of nine cases were listed as “unknown.”

When the CDR system is up and running, the council will also look at all cases between 2018 and 2020 to avoid missing any suspicious deaths.

It will pay special attention to cases where the cause of death remains unclear.

The verification committee will scrutinize every case. The committee is comprised of members of the prefectural government, specialists in pediatrics, forensic medicine and emergency care as well as police, prosecutors, child welfare centers and academics.

It will also try to verify why children died from illness and suffocation to determine what steps local communities and families should take to prevent a recurrence.

The prefectural government earmarked roughly 12 million yen ($112,080) in central government subsidies for the program in its supplementary budget plan in June. It will entrust the project to Shiga University of Medical Science, which will start to implement the program on a full-scale basis in late July.

“When a child death occurs, the most important thing is to grasp the parts that often only emerge over time," said a prefectural official at the medical policy section. “Based on that knowledge, we are trying to take all possible steps to prevent child deaths."