Fossils show yet another dolphin species had lived in Gunma 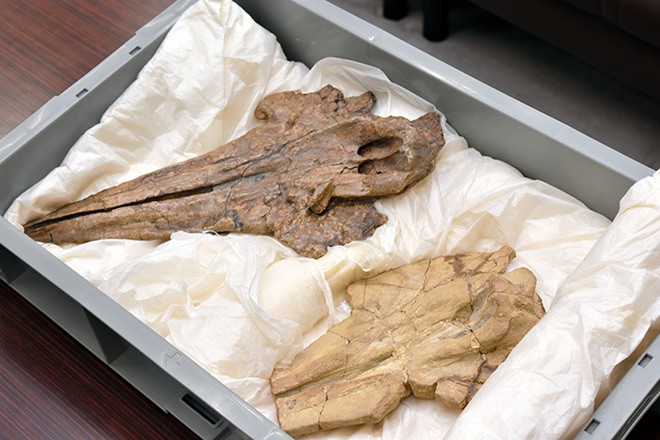 MAEBASHI—Two fossils found by a lifelong collector of natural objects represent a new species of the Delphinidae family, whose offspring include the killer whale and dolphin varieties, the Gunma Museum of Natural History said.

Based on the age of the geological formation in southwestern Gunma Prefecture where the specimens were uncovered, the species likely dates back 11.3 million years, museum officials said.

That would make the findings the world’s oldest delphinid fossils.

The specimens were discovered by Hajime Nakajima, a 68-year-old resident of Annaka, Gunma Prefecture, 20 to 40 years ago in an outcrop of the geological formation that extends from Annaka to Takasaki along the Usuigawa river.

Nakajima said he has been collecting wild edible plants, tree nuts, minerals and other natural objects that have fascinated him since childhood.

He donated the fossils to the Gunma Museum of Natural History.

Two years ago, Toshiyuki Kimura, a curator with the museum, and Yoshikazu Hasegawa, its honorary director, began studying the fossils.

They found the specimens are remnants of two separate individuals measuring around 2 meters in body length.

Left-right asymmetry of the upper jaw bone, the shape of the nostril and other features led the scientists to conclude the fossils represent a new species.

“Norisdelphis annakaensis,” the scientific name for the new species, was taken after the place of its discovery.

A 9-million-year-old delphinid fossil found in Shin-Totsukawa, Hokkaido, was previously considered the oldest one known.

This marks the third time a new fossilized whale or dolphin species has been discovered in landlocked Gunma Prefecture, and the first since Nakajima found “Kentriodon nakajimai,” which was recognized in 2019 as a new species.

All three species came from the same geological formation, which is called the Haraichi Formation of the Annaka Group.

“It is quite uncommon for so many fossils to be found so close to each other,” Kimura said. “This is yet more proof that Gunma Prefecture was home to many whales and dolphins when the area was part of the ocean 10 million years ago.”