EDITORIAL: First order of business for new top prosecutor is to cleanse system 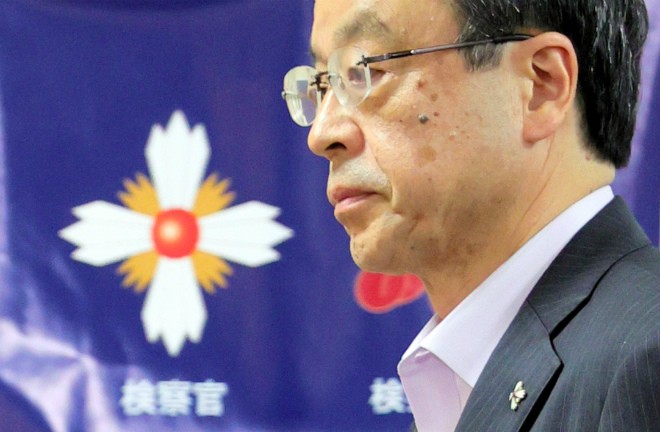 The move at least put an end to a nearly six-month saga of shabby political disarray that began when the Abe administration connived to eventually promote Hiromu Kurokawa, a “friend” of the prime minister, to the nation’s highest prosecutorial post at the Supreme Public Prosecutors Office.

But the amendment bill was eventually killed by stiff popular opposition, and Kurokawa resigned from office in late May.

With Hayashi now set to assume the top prosecutorial post, it is his responsibility to lead a thorough re-examination of the duties of public prosecutors and strive to regain the public’s lost faith in the system.

Having a virtual monopoly on initiating indictments of crimes in high places, an attitude of strict impartiality is the greatest requirement of every public prosecutor.

But the actions of the Abe administration were perceived as threats to the very independence of prosecutors.

What Hayashi must bear in mind above all is that public opinion, which fully recognizes the importance of that independence, is not necessarily in support of the current state of the nation’s prosecutorial system.

Specifically, Japanese prosecutors demand court orders for lengthy detentions of defendants and suspects, even those who have denied the charges against them. Prosecutors act as if they own any evidence they have collected using their authority and hide any exculpatory evidence.

And they refuse to adequately explain their cases by citing privacy or using the standard excuse that further disclosure would negatively impact the ongoing investigation or trial.

While some of these offensive practices are being corrected through legal amendments and objections from defense attorneys, the overall self-righteousness of prosecutors has certainly created a deep gap between them and the public at large.

One helpful “tool” for reviving the health of the system is a document titled “Kensatsu no Rinen” (The principles of prosecution), which was authored in 2011 in response to the fabrication of evidence by the Osaka District Prosecutors Office.

Hayashi, who was in charge of prosecutorial reforms as a member of the Supreme Public Prosecutors Office, played a central role in putting this document together.

Stressing the importance of “securing the trust of the people,” it declares: “Obtaining conviction by any means in all cases is not our goal, nor should we seek to impose harsh sentences without regard to the nature of the case. Our objective is to achieve proper dispositions and proper sentencing for each case, corresponding to its nature and representing the common sense of the people.

We hope prosecutors will take a new step forward by recalling their sense of crisis of 2011 and ensuring that every member of the entire organization recognizes their duty to represent the public interest.

Another major task is to try to repair damage and distrust, which still linger within the Justice Ministry and public prosecutors offices because of a recent train of events.

Although the Abe administration was behind them, there is no denying that it was the Justice Ministry that handled the procedures for delaying Kurokawa’s retirement by exploiting a legal loophole, and it also authored the controversial bill for revising the Public Prosecutors Office Law.

Those ministry officials were licensed prosecutors themselves. Their actions did great damage to the integrity of their profession, since the wrongness of what they were doing was clear even to people without special knowledge.

Article 15 of the Constitution states, “All public officials are servants of the whole community and not of any group thereof.”

All individuals concerned need to remind themselves of this.