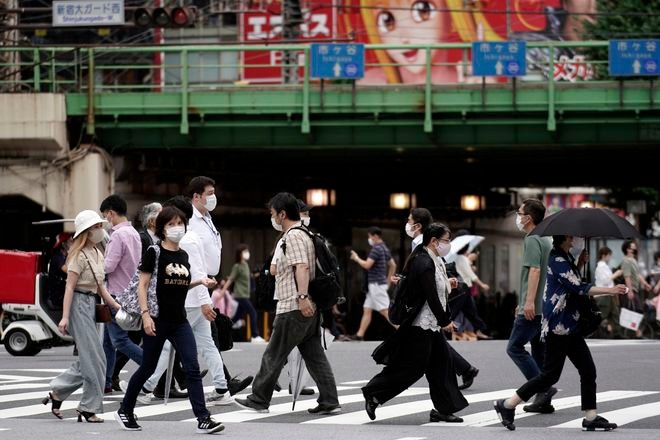 People wearing protective face masks to help curb the spread of the new coronavirus use a pedestrian crossing on July 10 in Tokyo. (AP Photo)

Local frustration and distrust are growing over the Tokyo metropolitan government’s reluctance to seek another business shutdown during the recent resurgence in COVID-19 cases.

On July 15, 165 new COVID-19 cases were confirmed in the capital. Tokyo has reached triple-digits every day since July 2, expect July 8, when 75 new infections were reported.

“I think Tokyo as a whole has already crossed the line and entered a second wave in the pandemic,” Takaaki Yamazaki, the mayor of Koto Ward, said at a news conference on July 14. “An unprecedented number of people infected with the virus have been reported at care facilities for the elderly, nurseries and schools in every ward in the capital.”

On the same day, the tally of new COVID-19 cases in Tokyo was 143, pushing the total number for the past week to 1,216, a pace faster than that in April, when the virus was raging in the capital and a state of emergency was declared.

The known sources of infection and the ages of the patients have become more varied.

Recently, people appear to have contracted the virus at dinner parties and at home. Many infection cases at schools and care facilities for elderly people and children have also been reported around the capital.

At a public nursery in Bunkyo Ward, a total of 31 staff members and children have tested positive for the virus since July 10, the metropolitan government said July 14.

Over the past week, children under the age of 10 accounted for 4 percent, or 49, of all new cases in Tokyo, double the 1.9 percent, or 14, the previous week.

On July 14, new COVID-19 cases were confirmed at a kindergarten in Setagaya Ward and a child care facility in Nakano Ward.

People 60 or older accounted for 6 percent, or 73, of the patients.

But if the virus keeps spreading and infecting elderly people who are more likely to develop severe symptoms, the capital’s health care system will become severely strained once again.

However, the central and metropolitan governments remain cautious about asking businesses to close and residents to stay home like they did during the nationwide state of emergency.

Tokyo Governor Yuriko Koike had talks with Yasutoshi Nishimura, the state minister in charge of economic revitalization who is also the point man for the central government’s efforts to deal with the pandemic, on July 10.

After the meeting, they listed several guidelines to prevent the virus from spreading in the capital, including expanding testing systems in virus hot spots, increasing staff numbers at public health centers and urging nightlife businesses, such as host and hostess clubs, to strictly follow health protocols.

Koike had called on residents “not to travel outside Tokyo for nonessential purposes” on July 4 when the daily tally of new cases reached 100 for the third consecutive day.

But she later toned down her wording by adding “if you don’t feel well.”

One metropolitan government official said Koike might not be the best person to ask certain businesses to shut down.

“More than a few businesses refused to follow such requests even under the central government’s state of emergency,” the official said. “It would be more effective for ward and municipal offices who know locals more intimately to make such requests directly.”

If a ward or municipal office asks businesses to close and pays money to those that cooperate, the metropolitan government promises to provide 500,000 yen ($4,660) per business.

The metropolitan government has pooled a budget of 5 billion yen for that purpose.

In Toshima Ward, where infection clusters at host clubs have occurred in Ikebukuro’s nightlife district, officials have said they will use that money.

However, many ward mayors are skeptical about the effectiveness of such requests considering their limited authority.

In Shinjuku Ward, the number of infected people has topped 1,000.

“Such requests from ward and municipal offices have no legal authority whatsoever,” Shinjuku Ward Mayor Kenichi Yoshizumi said. “It is a real challenge for us to make it viable.”

Toshiko Kikkawa, a professor of organizational psychology at Keio University, pointed out that the metropolitan government has shifted its narrative in explaining the pandemic situation to residents.

Tokyo officials initially relied on the number of confirmed infections to determine when to take government measures. Recently, however, they are focused more on the number of hospital beds available for COVID-19 patients and the stability of the health care system.

“The metropolitan government has not provided a sufficient explanation on why the focus was shifted, and residents are having a hard time trusting the authority’s handling of the pandemic,” she said.