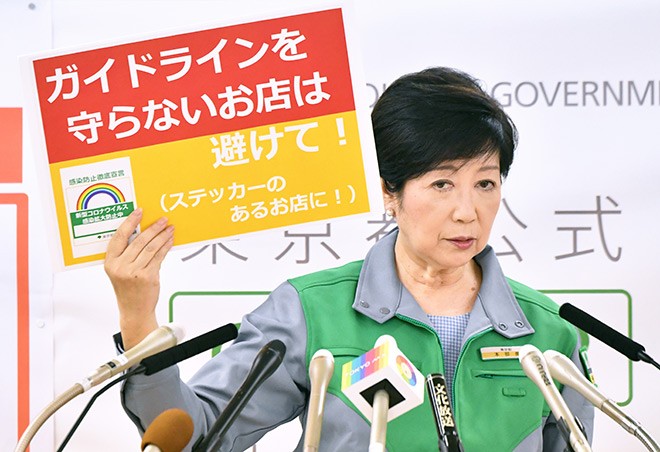 Tokyo Governor Yuriko Koike holds up a sign at her July 15 news conference urging local residents to avoid establishments that are not abiding by guidelines to prevent COVID-19 infections. (Takuya Isayama)

Tokyo shattered the daily record for new COVID-19 infections with 286 cases on July 16.

The highest number of new infections until now was the 243 reported on July 10.

The capital marked seven consecutive days until July 15 of more than 100 new infections, prompting the metropolitan government to raise its alert regarding the pandemic to the highest level 4 on the same day.

Because it usually takes about three days for metropolitan government officials to compile the number of new cases, attention had been focused on the count for July 16 because there were about 4,000 polymerase chain reaction and other tests given on July 13.

The panel also pointed out that infections were spreading not only among the younger generation, but also among the elderly, who are more prone to developing serious symptoms.

The transmission routes had also become more varied as infections were spread through various facilities, among family members living together, at the workplace and during meals involving groups of friends or colleagues.