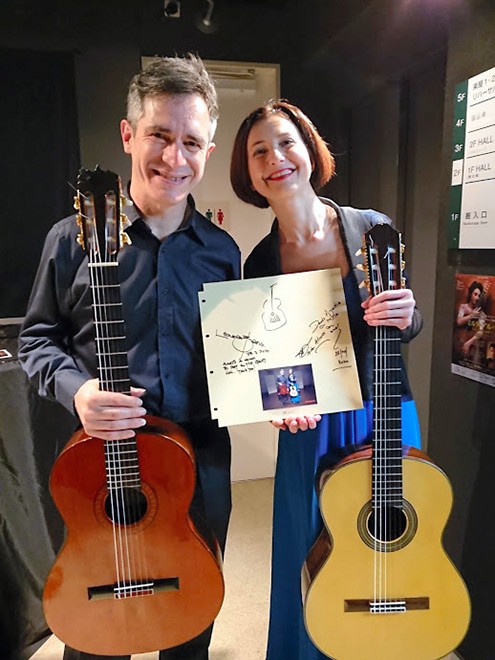 Argentine guitarists Mirta Alvarez, right, and Leonard Bravo pose for a photo at Munetsugu Hall in Nagoya on March 28. (Provided by PaPiTa MuSiCa)

Tango guitarist Mirta Alvarez was originally booked to play a few shows in Japan in February and March and then fly home to Argentina.

But the COVID-19 pandemic has stranded her here due to the suspension of air travel.

While that has caused major inconvenience for the artist, it is good news for her fans as the experience inspired Alvarez to come up with about 10 new songs, which she says she “intends to refine and make into an album.”

“Since I came to Japan, I’ve experienced winter, beautiful spring and summer. I even marked my birthday here,” said Alvarez, 41, who arrived on Feb. 18 and was scheduled to leave March 30.

That flight was canceled due to the pandemic, and Alvarez has been living in Tokyo since with the family of classical guitarist Hideo Morii.

The outbreak also upended the short tour she was scheduled to perform along with workshops in the capital, Osaka, Nagoya, Fukuoka and other Japanese cities. Some dates went off as planned but her March 26 show in Yokohama was scrapped after cases of COVID-19 started surging in Japan.

Her following concerts in Nagoya and Ishioka, Ibaraki Prefecture, were held, but audience turnout plummeted.

While Alvarez has managed to come up with new songs by drawing on inspiration from her prolonged stay in Japan, she is also deeply concerned about the health of her parents and grandmother in Buenos Aires.

“I hear people are under strict control there compared with Japan and must file a request for permission from authorities when they want to go out,” she said, referring to emails she has received from relatives.

With the outbreak ongoing, Alvarez has been spending her time mostly inside, working on new pieces and arranging, while also teaching guitar lessons online.

About 10 pieces she has composed are directly inspired by sights and sounds from her stay in Japan--a view of snow from a window, new green leaves budding in spring, various kinds of flowers sold at a supermarket she visits regularly, and the 5 p.m. time signal that sounds over the outdoor P.A. system in her neighborhood.

In Buenos Aires, Alvarez lives alone, away from her parents, who are in their 60s, and her grandmother, who is in her 90s.

She said they told her in emails that COVID-19 has spread there among the country's poor.

“I’m really worried about whether there are enough hospital beds left to treat patients,” she said. “And I’m worried about a ton of other things there as well.”

The musician can finally expect to return home late this month or in early August. But her trip back home is not without constraints. The dates she can enter Argentina are regulated and airfare is higher than usual.

Before her departure after spending five months in Japan, Alvarez will perform at Munetsugu Hall in Nagoya on July 23, with three other guitarists.

They plan to play pieces that will convey the diversity of Argentine music to the audience.

The concert will open at 6 p.m. for a limited audience of 150 as a precaution against the novel coronavirus. Tickets are 3,000 yen ($28) for seats, which are unreserved.