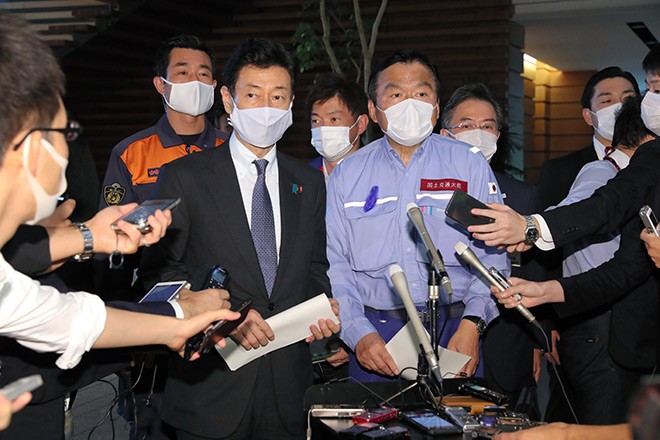 Yasutoshi Nishimura, left, state minister in charge of responses to the new coronavirus pandemic, and tourism minister Kazuyoshi Akaba speak to reporters after a meeting with Prime Minister Shinzo Abe in Tokyo on July 16. (Takeshi Iwashita)

The government decided to exclude Tokyo from the “Go To Travel” campaign after local government officials and medical experts raised fears that the tourism program would spread novel coronavirus infections from the capital.

The campaign, which is scheduled to start on July 22, will subsidize up to half of the cost of a domestic trip. It is designed to help the tourism industry recover from the effects of the novel coronavirus pandemic.

Tourism minister Kazuyoshi Akaba told reporters on July 16 that Tokyo residents for the time being would not be able to take part in the campaign to visit other prefectures. In addition, trips to Tokyo from Japan’s 46 other prefectures will not be eligible for the subsidy.

The capital has confirmed more than 100 new infection cases daily since July 9, and even some members of the ruling coalition had called for changes to the planned nationwide start of the Go To Travel campaign.