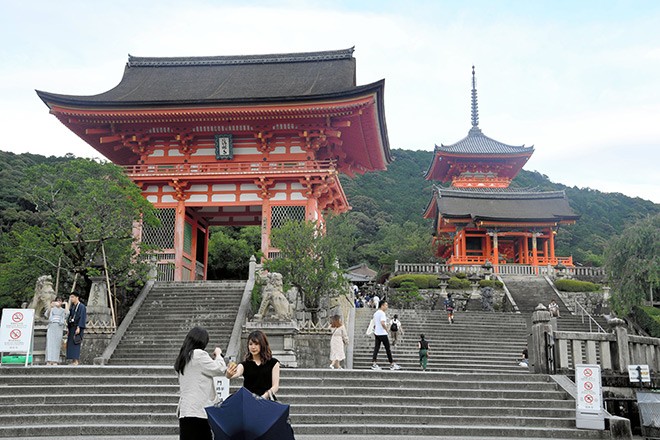 Few tourists are seen around Kiyomizudera temple in Kyoto on July 16. (The Asahi Shimbun)

In “Space Force,” an American TV series streamed online, a United States Space Force commander insists on launching a rocket as planned, even though all the scientists warn the launch will fail because the humidity conditions are not right.

But the commander orders the launch anyway, wanting to impress a congressional delegation visiting the base at the time.

In explaining why he doesn’t trust science, he cites the unreliability of weight-loss programs.

The U.S. Space Force, the backdrop against which this show unfolds, is an entity established by U.S. President Donald Trump as a new branch of the U.S. Armed Forces.

The series is essentially slapstick comedy. But given the ongoing tug of war between the scientific community and political circles amid the new coronavirus pandemic, I catch myself taking some episodes rather seriously.

In Japan, the government’s “Go To Travel” campaign is getting shakier by the day.

When the nation was under a state of emergency, “stay home” was the government’s go-to mantra. But the government has started encouraging people to travel, offering to subsidize their trips.

On July 16, the government said, “Please refrain from traveling to and from Tokyo.” Talk about being inconsistent.

British Prime Minister Winston Churchill (1874-1965) was thoroughly aware of the difficulty of predicting the future.

He famously said politics is “the ability to foretell what is going to happen tomorrow, next week, next month and next year … And to have the ability afterward to explain why it didn’t happen.”

Applying his words to the pandemic, I expect politicians to be cautious in judging the timing of implementing policy measures, although even scientists are hard-pressed to say what to expect next week or next month.

Come to think of it, the Cabinet of Prime Minister Shinzo Abe decided to launch this campaign “after the spread of the infections has been brought under control.”

For the time being, shouldn’t the government be running a “Don’t Go To Travel” campaign?