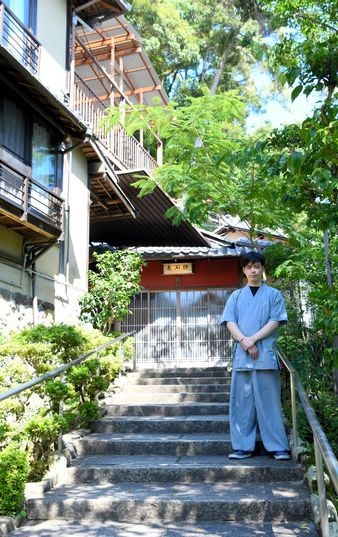 Kota Kanamaru on June 23 stands on stone steps leading to the entrance to the Kameishiro ryokan in Uji, Kyoto Prefecture, where a scene from a Kyoto Animation Co. work is set. (Akari Kamiya)

UJI, Kyoto Prefecture--When guests stayed at a long-established ryokan inn here, they would often book a Japanese-style room called Amagase from all the offerings.

“I did not know why then,” said Kota Kanamaru, 25, the eldest son of the Kameishiro inn manager.

About 10 years ago, Kanamaru asked a guest the reason and learned that Kameishiro is regarded as a "holy place" for Kyoto Animation Co. lovers, after being depicted as a setting for one of the locally based firm's works.

That loyalty recently helped save the inn, when anime fans pitched in enthusiastically to help continue its operations during the novel coronavirus pandemic.

The effort came almost a year after a studio of Kyoto Animation was deliberately set on fire on July 18 last year, killing 36 people and injuring many others.

Anime lovers hope to see the ryokan recover and prosper, along with Kyoto Animation.

Situated near Byodoin temple, a World Heritage site, Kameishiro’s building was constructed 130 years ago along the Ujigawa river.

In the 18th installment of Kyoto Animation’s “Clannad: After Story,” a father and daughter on a trip amid an awkward atmosphere view fireflies through a window at a ryokan. After seeing his daughter sleeping soundly, the father falls asleep peacefully.

Although the scene set at Kameishiro and Amagase runs no more than two minutes, Clannad fans highly appreciated it because the episode portrays the important process for the parent and child to rebuild bonds with one another.

Hearing the reason, Kanamaru binge-watched all the episodes of the title, and was surprised that the story is full of so many serious themes, such as friendship, family and life, with word spreading among fans that “‘Clannad’ represents life.”

The “Clannad” series, the animated adaptation of a video game, was created by Kyoto Animation to depict the meeting of a lazy young man who is often late for school with the heroine at high school as well as the boy’s growth.

The scenery of Uji, which is home to Kyoto Animation’s headquarters, is featured in “Sound! Euphonium,” a TV anime series released in 2015, as well. The local landscape is faithfully reproduced in the work, inspiring more anime lovers to visit actual spots appearing in animated stories.

Kameishiro is also popular as an accommodation facility for those anime-conscious tourists.

However, it was difficult even for the popular inn to overcome the COVID-19 outbreak. Citizens were requested to refrain from venturing out unless necessary, resulting in a storm of cancellations starting from February.

Whereas its rooms were once fully booked by visitors who planned to see cherry blossoms in April until last year, there were effectively no guests in the month this year. The hotel’s operator thus once thought of closing Kameishiro.

Trying to continue its business at any cost, Kanamaru solicited funds on the internet through a crowdfunding drive. The campaign was shared among fans abroad via social media sites.

Chinese anime lovers translated the funding site into Chinese so donations accepted in the country could be sent to Kameishiro.

A total of 322 individuals both in and outside Japan donated 3.69 million yen ($34,470) during the one-month campaign period from May 1 through June 10, well exceeding the target of 3 million yen.

Noriyuki Fukuura, 64, a senior medical corporation official in Kyoto’s Ukyo Ward, who set up a Facebook account to support Kyoto Animation on the night of the arson attack, said he is one of the donors.

Fukuura, who has been calling on animated cartoon lovers to tour places featured in anime works on mapping apps to respond to the virus spread, likens Kyoto Animation titles to “traditional craftsmanship” in Kyoto.

“They (works by Kyoto Animation) are elaborately made by creators thoroughly considering how to impress viewers and provide a dream like the Nishijin-ori textile and Kyo-yuzen fabric dyeing,” he said.

Explaining his decision to make a contribution, Fukuura noted he wants to “preserve the place where an anime work is set as enthusiastically as I lend a helping hand to Kyoto Animation.”

Kameishiro received many encouraging messages from fans of both Kameishiro and Kyoto Animation along with donations.

A donor writes, “I sent what little money I have because I think the support will also lead to help Kyoto Animation, which was stricken by the disastrous incident.”

Another offered words of encouragement to Kameishiro and Kyoto Animation, saying, “A series of sad events, including the arson at Kyoto Animation last year, occurred, but I believe Kameishiro will surely be able to overcome the coronavirus outbreak to resume operations.”

Kameishiro plans to use the solicited funds for not only improving its financial situation but also developing original goods and organizing events for fans.

“We could receive much support thanks to Kyoto Animation staff with great talent,” said Kanamaru. “With the incident and feeling of gratitude in mind, we will preserve the ryokan in the holy place.”