Tours for elderly people, partiers may be dropped from ‘Go To’ plan 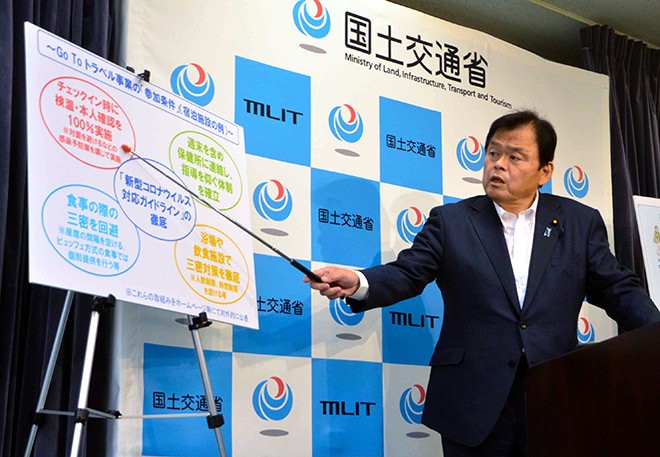 The government might exclude group tours by elderly and young people, and those planning to party, from the “Go To Travel” campaign, the tourism minister said July 17, a day after coronavirus-hit Tokyo was omitted.

Kazuyoshi Akaba officially announced at a news conference after a Cabinet meeting that trips to and from Tokyo will not be eligible for the subsidy program, which is scheduled to start on July 22.

Akaba said some members of the government council of COVID-19 experts at its July 16 meeting also advised against group tours by young and elderly people and trips involving big drinking parties. The members said such excursions could carry a high risk of novel coronavirus infections among the participants.

Akaba said the government will consider barring participants of such trips from the Go To Travel subsidy program. He added that discussions with an organization commissioned to handle administrative procedures for the campaign will be held to decide what kinds of trips should be dropped.

The program, intended to help the tourism industry recover from the effects of the COVID-19 pandemic, will subsidize up to half of the cost of a domestic trip.

Akaba acknowledged that excluding Tokyo from the campaign would reduce the positive economic effects of the program.

“I understand that tourism companies and residents in the capital have high hopes for the campaign,” Akaba said. “The decision (to exclude Tokyo) was heartbreaking.”

The government moved up the start of the nationwide campaign from mid-August to July 22. But health experts and local government officials around Japan voiced opposition in light of the surging number of COVID-19 cases, particularly in Tokyo. That led to the approval of the expert council on July 16 to exclude the capital.

“We’ll do our utmost to create an environment so that people can enjoy trips to Tokyo from around the country as soon as possible,” Akaba said.

He noted that the government will monitor the spread of infections and hear the opinions from experts before deciding on whether to include Tokyo in the subsidy program.

“It’s an unavoidable decision to take precautionary safety measures rather than seek a greater economic impact,” he added.

Akaba also said the government is “not considering” reimbursing those who had to cancel their travel reservations because of the exclusion of Tokyo from the campaign.