An image of Inubosaki Lighthouse appears when soy sauce is poured into the dish. (Kiyoshi Takagi) 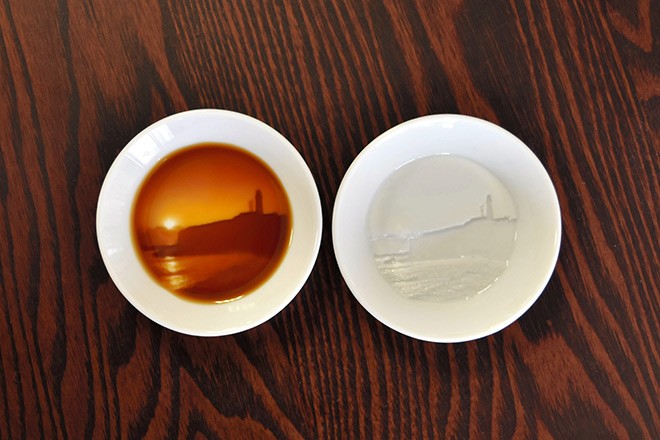 A dish sold by Yoshikawa Toki Co. in Choshi, Chiba Prefecture, reveals the silhouette of Inubosaki Lighthouse lit by the morning sun when soy sauce is poured into it. (Kiyoshi Takagi)

CHOSHI, Chiba Prefecture--Customers can be forgiven for seeing things in the soy sauce poured into dishes made by a long-established ceramics shop here.

The porcelain dish processed with 3-D technologies to leave uneven patterns on its surface is made specially to reveal the silhouette of Inubosaki Lighthouse against the backdrop of the morning sun when soy sauce coats the inside of it.

A video clip showing how the lighthouse seems to magically emerge went viral online, attracting orders even from outside Japan.

Founded more than 100 years ago, Yoshikawa Toki Co. has come up with a variety of original items associated with Choshi, including small plates featuring sardines, a local specialty, and mugs featuring patterns inspired by the strata of the Byobugaura coastal cliffs.

After learning about dishes that revealed images of a cat, Mount Fuji and other motifs when colored liquids were poured into them, Toru Yoshikawa, 55, the store's third-generation proprietor, engaged a company in Hiroshima Prefecture with expertise in making the plates to produce one with the lighthouse.

The design was based on a photograph showing Cape Inubosaki and the lighthouse in silhouette with the sun rising from the sea.

Yoshikawa wanted to capture details such as sunlight glistening on the ocean surface to express the real-life landscape as much as possible. He repeatedly asked the company to add modifications to prototypes before the mold was completed, which took about a month.

His unique dish got a helpful boost after a video Yoshikawa posted on social media was featured on the city government's Instagram account, with orders coming from as far as Texas.

For more information, visit the shop's official website at (http://www.yoshikawatoki.com/).