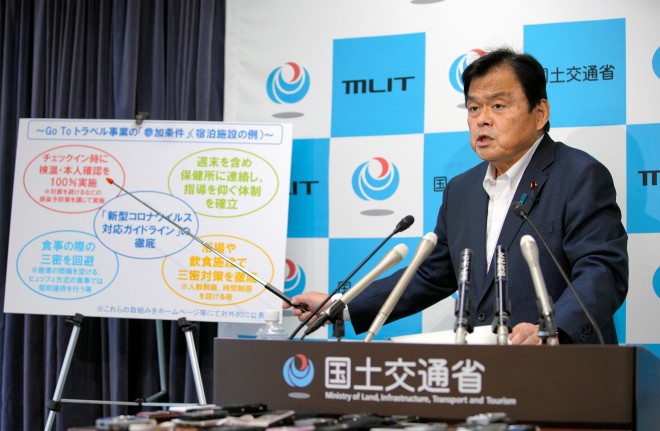 Revisions the government has made to its massive subsidies program to perk up the tourism industry, now on the ropes due to the new coronavirus pandemic, will do little to allay public concerns about a flare-up of new cases.

The program should be put on ice and fundamentally redesigned.

In response to a backlash from the public and local governments, the government decided to exclude residents of Tokyo and trips to the capital from its "Go To Travel" program to subsidize travel expenses. But in all other respects, the program will still go ahead on July 22 as scheduled, the government said.

Its response to public concerns about the program's effects on the outbreak is an eleventh-hour attempt to rescue a questionable initiative.

A group of experts advising the government on its policy to deal with COVID-19 recommended after a July 16 meeting that group tours by elderly and young people, and those planning to have a large party during the trip, should be excluded from the "Go To Travel" campaign.

However, the tourism ministry has yet to decide whether to follow the experts' advice.

Tourism minister Kazuyoshi Akaba said July 17 the ministry will consider taking the step. He also said the government may only issue a request for voluntary restrictions on such trips, citing the difficulty of determining the specifics, such as the ages and number of people taking part in each tour that would be subject to the proposed exclusion.

At the heart of this issue is the government's refusal to face squarely the grim reality of infection in this nation in a rush to get the economy back on track.

The government abruptly announced July 10 that it will move up the program's launch date, which was initially set at mid-August, to goose travel demand during the summer vacation period.

But the day before the announcement, Tokyo reported a record daily number of newly confirmed COVID-19 cases.

The government's move provoked a chorus of criticism among local governments worried that the program could help spread the virus to wider areas.

Since the nationwide state of emergency was lifted, the government has been downplaying the implications of the rise in new cases, saying the fresh outbreak is mostly limited to nightlife districts in Tokyo.

As a result of this rhetoric, the government's response to the worsening situation can only be seen as tardy.

The reality is that new cases are trending up nationwide, with routes of infection not known in many instances. Transmissions within households and workplaces are also rising.

If the uptick in cases continues in areas around Tokyo and Osaka, will the government be ready to move quickly to narrow the scope of the program further?

Few would dispute the need for swift policy support for the embattled tourist industry. And obviously, the government should try to keep the economy afloat without allowing a sharp resurgence in COVID-19 cases.

But these policy imperatives do not justify a tax-financed subsidies program to encourage people to go on trips.

Residents and businesses in Tokyo are also taxpayers. Excluding the capital from the program raises questions about fairness.

In its editorials, The Asahi Shimbun has urged the government to shelve the Go To Travel campaign for the time being and transfer the 1.35 trillion yen ($12.61 billion) earmarked to finance the program to local governments to support their own efforts to prop up their tourism industries.

This argument is based on our belief that local communities should have the final say over what should be done to salvage their beleaguered local tourism industries.

Dealing effectively with the unknown virus requires flexible responses to the changing situation.

The government should not be reluctant to think twice about the wisdom of rolling out the questionable program simply because it has already made the decision.