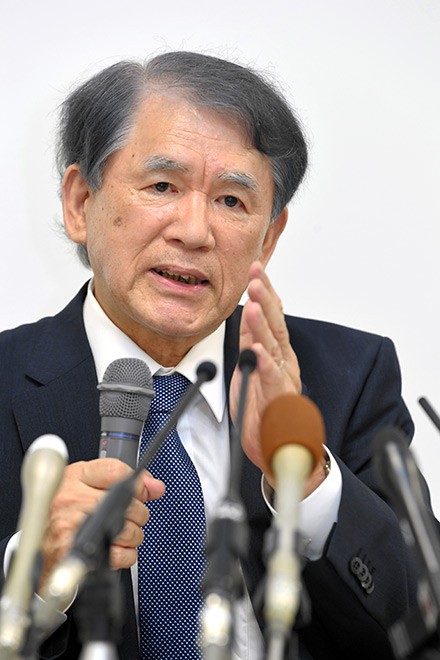 Hideaki Hatta, president of Kyoto Animation Co., speaks at a news conference in Kyoto on July 18, the first anniversary of the deadly attack on the company’s studio in the city. (Kenta Sujino)

KYOTO--The president of Kyoto Animation Co. on July 18 said that the show must go on as he mourned the 36 lives lost on the one-year anniversary of the arson attack on its studio here.

“We are determined to work hard to create stirring anime filled with hopes and dreams,” Hideaki Hatta said at a news conference in Kyoto. “We are also determined to drive ourselves forward even by 1 millimeter.”

The arson attack on the company’s No. 1 studio building in Fushimi Ward occurred around 10:30 a.m.

Two minutes after the alleged perpetrator, Shinji Aoba, sprayed gasoline near the staircase on the first floor of the three-story studio, about 70 people inside were effectively trapped in the building due to heavy smoke and fire engulfing it.

Thirty-three people were injured, many of them seriously, in addition to the 36 deaths.

Aoba, a 42-year-old unemployed man from Saitama, was arrested on suspicion of murder and arson. He has been undergoing a psychiatric evaluation to determine if he can be held criminally responsible for his actions. Prosecutors in Kyoto will decide whether to indict him based on the results of the evaluation by experts.

Speaking of Kyoto Animation employees who escaped the inferno, Hatta said, “Some of them still have been unable to recover from the shock.”

He also said that the company’s first film it worked on after the attack, “Violet Evergarden,” was completed in the memory of those who died or were injured. The anime will be released in theaters on Sept. 18.

On the one-year anniversary of the tragedy, a memorial service was held at the former site of the studio.

The wife of Futoshi Nishiya, who was 37 when he died in the attack, gave a eulogy on behalf of the bereaved families, saying how much she misses her husband.

“I want to see you every day and miss you every day,” she said. “When I eat, I find myself looking for you where you used to be seated during our meals.”

She also said, “We will continue to move on to keep alive the legacy of your lives and keep Kyoto Animation as a company loved by fans everywhere in the world.”

Eight-five relatives of the dead, Hatta and others paid a silent and floral tribute during the service.

An estimated 26,000 fans watched the live streaming of the memorial service on YouTube.

After the service ended, about 100 Kyoto Animation employees visited the site to pay their respects.

Work to demolish the burned-out shell of the building began in January. The site has been vacant since late April.

Hatta said it will take time to decide what to do with the property.

“I want to discuss the matter with bereaved families, employees and people in the neighborhood,” he said.