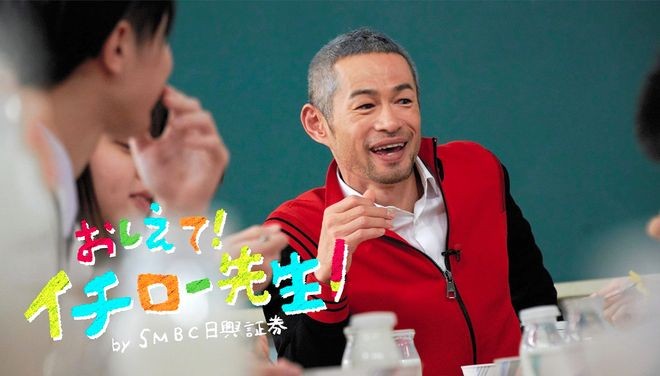 A scene from the “Teach me, Ichiro sensei” series (Provided by SMBC Nikko Securities Inc.)

Baseball legend Ichiro Suzuki has landed a second career as a life coach, offering advice on topics ranging from jobs to romance and providing insightful and sometimes surprising comments about his own choices.

The former Seattle Mariner and future hall of famer is featured in an advertisement campaign for SMBC Nikko Securities Inc., answering all kinds of questions asked by people.

Known for his calm and stoic demeanor in the field and batter’s box, Suzuki’s beaming smile in the campaign videos has amassed a buzz from fans.

The company named Suzuki as its brand ambassador and started airing 27 different videos under a series titled, “Teach me, Ichiro sensei (teacher),” in late June.

In each segment using a school classroom setting, Suzuki, standing in front of a blackboard, takes questions from children and adults, some of whom were in their 70s.

But if you expect questions about his signature glide-step and quick swing, you would be disappointed.

One girl asked, “Why do we kids have to go to bed early while adults are allowed to stay up late,” inviting a chuckle from fellow students.

An elderly man mustered up the courage and asked Suzuki: “I want to fall in love again. Do you think I can at this age?”

Suzuki said, “Yes, you can,” in response to the gray-haired romance seeker.

“Although I might have to say ‘no,’ if you ask me if you can become a major leaguer,” Suzuki added, getting a big laugh from the room.

Suzuki looked back on his decorated baseball career when asked by a food-loving student whose dream is to become a sushi chef and open a restaurant.

Suzuki offered insightful advice to the student, saying that doing something you like and choosing it as a profession are completely different things.

“Once I became a professional player, there was no fun at all. Zero. It was not the same baseball I played in elementary and junior high schools,” he said, emphasizing the responsibility that comes with the job.

Asked if he wanted to become a professional baseball player if he could start his life again, Suzuki said, “I can’t say positively that I do.”

While encouraging the student to pursue his dream, Suzuki said, “I want you to know that is what being a professional is about.”

The videos were viewed more than 18 million times in the first two weeks.

They can be seen at: (https://www.smbcnikko.co.jp/ichiro-sensei/index.html)