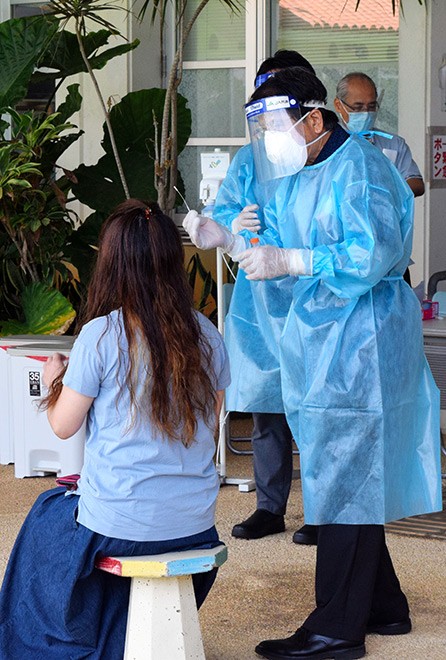 A restaurant worker who is likely to have come into contact with U.S. military personnel or civilian employees undergoes a polymerase chain reaction (PCR) test on July 19 in Kin, where U.S. Marine Corps Camp Hansen is located. (Mika Kuniyoshi)

Local authorities across Okinawa Prefecture that host U.S. military bases have united to protest rising COVID-19 cases at the facilities and to demand more transparency in the release of such information.

Municipal assemblies as well as the prefectural assembly will or have all adopted resolutions or written opinions in recent days to vent their frustration at the paucity of details provided by U.S. military authorities in their quest to prevent infections from spreading further among the civilian population.

The protests call on U.S. military authorities to provide more information on the movements of infected individuals outside their bases. They are also seeking a halt until the health crisis is over of all arrivals of U.S. military personnel from the United States to the prefecture.

The Okinawa prefectural assembly unanimously adopted a resolution and written opinion to this effect on July 10. Municipal assemblies in Ginowan, Kin, Ginoza and Chatan had followed suit by July 17, and the Okinawa city assembly passed a similar resolution on July 20. The Kadena town assembly plans to hold an extraordinary session on the issue on July 22 as well.

The U.S. Marine Corps Air Station Futenma has the highest number of reported infections among all the U.S. bases in the prefecture after five new cases were confirmed at the facility on July 21, raising the total figure there to 82.

The city assembly in Ginowan, which hosts the air station, held an extraordinary session on July 17 where it adopted a resolution and written opinion urging the U.S. military authorities there to strictly prohibit their military personnel and civilian employees from going out until the outbreak is brought under control.

Of about 52,000 U.S. military personnel and civilian employees stationed in the prefecture, some 16,000 live outside the bases, according to the most recent data provided by U.S. military authorities.

“One-third of those stationed in the prefecture live outside the bases and may have come into contact with local residents,” said the head of the assembly steering committee. “After cluster infections at U.S. bases came to light, residents cannot help but feel anxious and fear they may become infected.”

In Okinawa city, which hosts the sprawling U.S. Kadena Air Base, one local taxi driver who often entered and exited U.S. Marine Corps Camp Hansen, located in the northern part of Okinawa’s main island, tested positive for the novel coronavirus on July 16.

At its July 20 extraordinary session, the Okinawa city assembly passed a resolution protesting the spread of infections at U.S. bases, saying it “gives great concern and shock to local residents, who are forced to live next to the bases separated by only a fence.”

The prefectural government is conducting polymerase chain reaction (PCR) tests on Japanese workers at U.S. bases and those living near the bases.

On July 19, 198 employees of restaurants used by U.S. military personnel or civilian employees underwent PCR tests in Kin after the prefectural government and Okinawa Medical Association called on them to take the tests.