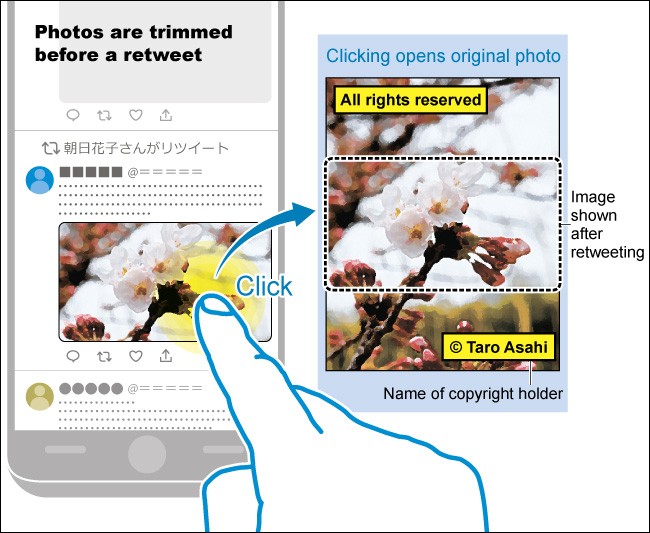 A Supreme Court ruling could force the millions of Twitter users in Japan to be more careful about tweeting or even retweeting photos found on the internet.

The top court’s Third Petty Bench on July 21 ruled that Twitter must disclose the email addresses of a Twitter user who posted a photo in violation of the moral rights of the copyright holder, as well as those who retweeted the original tweet.

A Twitter retweeting function that automatically resizes photos for posts can cut off the name of the copyright holder from the image.

Even if individuals who retweet the photo do not know that such omissions could occur, the act still violates the rights of the copyright holder to not have his or her work modified, the Supreme Court ruled.

Rio Saito, a lawyer for the plaintiff, called the ruling “groundbreaking” because the top court made clear that the rights of any individual should not be violated even through something as easy and seemingly innocent as a retweet.

The ruling could have huge ramifications because there are about 45 million Twitter users in Japan.

The plaintiff in the lawsuit, a photographer, discovered in December 2014 that someone had posted a photo of a lily of the valley on a Twitter account without the photographer’s knowledge.

The photo had already been uploaded to the photographer’s own website in June 2009. The photographer often took pictures of scenery in Hokkaido, Japan’s main northernmost island.

In addition to the unauthorized posting of the photo, the photographer also found that the post had been retweeted.

All versions of the retweeted photo had been trimmed from the original so the portion showing the photographer’s name as well as the “All rights reserved” wording were deleted.

Such lawsuits over copyright violations can be an arduous affair because of the high degree of anonymity over the internet.

The first step in claiming compensation for damage caused by unauthorized internet postings is to prove that one’s rights had been violated. Once that is established, the plaintiff needs to identify the individual who made the post.

In filing the lawsuit, the photographer asked Twitter to reveal the names of the account holders who posted and retweeted the photo.

The Tokyo District Court ruled that the unauthorized posting of the photo was a clear violation of the photographer’s copyright.

However, the district court rejected the plaintiff’s arguments that his copyright and moral rights had also been violated by those who retweeted the photo, ruling that the retweeters were not the main party to the rights violation.

The photographer appealed to the Intellectual Property High Court, which upheld the district court ruling that the initial unauthorized post of the photo was a copyright violation.

The high court ruled that no copyright violation had occurred regarding the retweets, but it did recognize that the photographer’s moral rights had been violated because the modified image had deleted the photographer’s name and wording “All rights reserved.”

The high court ordered Twitter to reveal the email addresses of the original unauthorized poster and the four others who retweeted the photo.

Twitter appealed to the Supreme Court, arguing that the retweeters may not have been aware of the trimming function and, therefore, did not intentionally modify the photo.

The company also argued that Twitter users would become more hesitant if they are held accountable for unintentional rights violations.

Four of the five justices on the petty bench sided with the plaintiff and ordered Twitter to reveal the email addresses of the account holders.

Justice Keiichi Hayashi was the sole dissenting voice. He argued that a ruling in favor of the plaintiff would place a huge burden on Twitter users because they would have to check on the origin of photos and copyright consent whenever they wanted to retweet a picture.

But Saburo Tokura, who served as presiding justice for the Third Petty Bench, wrote in a supplementary opinion, “Even if the burden may be considered heavy, that is not a good reason to make an interpretation that differs from those made for other postings on the internet as well as published materials.”

He also indicated that Twitter would have to take steps to thoroughly inform users about the trimming function for retweeting photos.

Kentaro Okamoto, a lawyer knowledgeable about internet media and copyright issues, said Twitter would have to consider revising its trimming function.

“If the current situation is left untouched, Twitter runs the risk of facing similar lawsuits in the future,” Okamoto said.