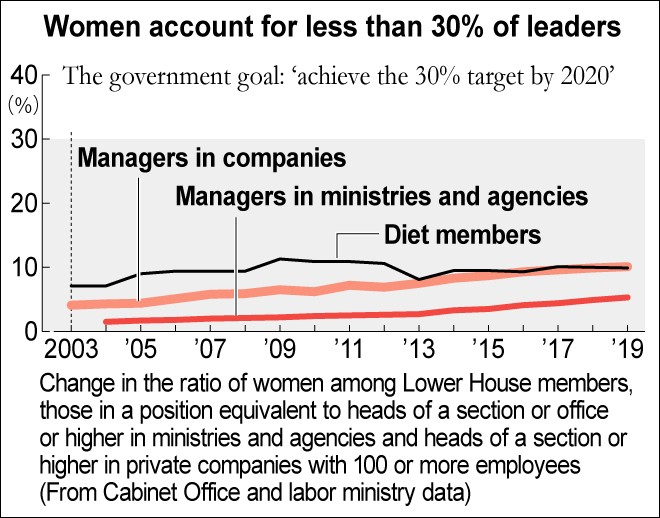 The glass ceiling that women in Japan had hoped would shatter this year is no longer a viable goal the government admitted in deciding to abandon its long-touted target of raising the share of women in leadership positions to 30 percent by 2020, sources said.

Instead, the Abe administration on July 21 decided to push back the deadline for a more equal share in gender equality to “as early as in the 2020s” without specifying a year.

The change in policy is especially embarrassing for Prime Minister Shinzo Abe, who has repeatedly stated his goal of creating a society where women can play leading roles.

Despite the Abe administration’s call for empowering women, Japan remains very much a male bastion. Japanese women are particularly underrepresented in politics and business.

The goal was set under the administration headed by Prime Minister Junichiro Koizumi in 2003.

Leadership positions mainly refers to Diet members and those in executive and managerial roles in the public and private sectors.

The government plans before the end of this year to draw up a new five-year Basic Plan for Gender Equality that starts from fiscal 2021.

On July 21, a special investigation committee compiled proposals for basic policy ahead of drafting the plan.

It said that while the goal of a 30-percent share had been put off for the time being, Japan should aim to become a society where there is "no gender gap among those in leadership positions” in the 2030s.

The committee pointed out that Japan “lags far behind other countries” with regard to the participation of women in politics.

It also expressed a sense of crisis, given that women account for less than 10 percent of Lower House lawmakers, placing the country at 166th out of 193 surveyed.

Among measures to improve women’s representation in politics, the committee proposed that political parties be urged to set a numerical target or introduce a quota system that requires them to field a certain number of women candidates in elections.

(This article was written by Taro Ono and Sawa Okabayashi.)