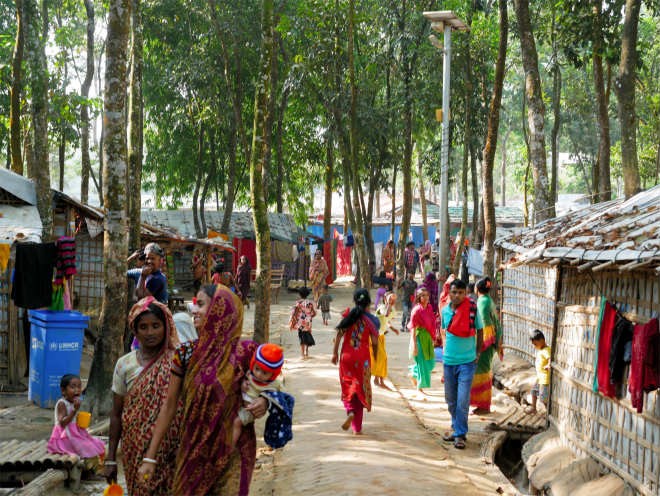 Refugees at this camp for Hindus say they have been threatened by Arakan Rohingya Salvation Army (ARSA) fighters in Cox’s Bazar in southeastern Bangladesh. (Asahi Shimbun file photo)

The Rohingya men were among 40 refugees convicted last month by a magistrates court on the northwestern island of Langkawi for entering Malaysia by boat without a valid permit. All 40 were also sentenced to seven months’ jail.

Muslim-majority Malaysia has long been a favored destination for Rohingya seeking a better life after escaping a 2017 military crackdown in Myanmar and, more recently, refugee camps in Bangladesh.

But Malaysia, which does not recognize refugees, has recently turned away boats and detained hundreds of Rohingya, saying it cannot take in more migrants because of a struggling economy as a result of the coronavirus pandemic.

The Alor Setar High Court, in Kedah state, set aside the caning penalty after reviewing the cases against 27 Rohingya men, said Collin Andrew, the refugees’ lawyer.

In its review, the court decided caning would be inhumane as the men were refugees and did not have any prior history of crime or violence, Andrew said in a statement.

“Today’s decision is laudable as it demonstrates the promotion and protection of human rights by the High Court,” he said.

In the past, courts have normally opted for caning when accused had committed an act of violence, a repeat offense, or threatened public order, Andrew said.

Several rights groups including Amnesty International and Human Rights Watch had urged Malaysia not to cane the refugees.

The court also ordered that six Rohingya teenagers, who had been convicted as adults and sentenced to seven months’ jail, be released to the U.N. refugee agency UNHCR following the completion of their detention on Monday, Andrew said.