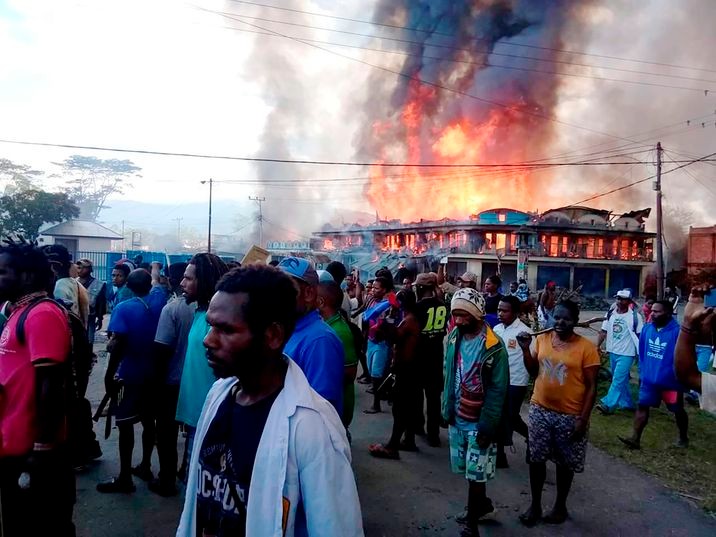 People gather as shops burn in the background during a protest in Wamena in Papua province, Indonesia, on Sept. 23, 2019. (AP Photo)

JAKARTA--Indonesia’s military rejected allegations on Wednesday by Papuan separatists that a father and son killed at the weekend in the country’s easternmost province were civilians, insisting the victims were linked to an armed rebel group.

The two adult men were carrying weapons when they were fatally shot by troops on Saturday near the district capital of Nduga, said Col. Gusti Nyoman Suriastawa, a military spokesman, adding that a gun, cash and a phone that belonged to a soldier were retrieved from their bodies.

The military in a statement said the two men were linked to an armed separatist group led by Egianus Kogoya, a leader from the Free Papua Movement.

“Why would they carry a pistol with them? Why would they snatch the weapons and a backpack belonging to the military?” Suriastawa said, insisting those killed were not civilians.

Papua has been plagued by long-running separatist tensions since the former Dutch colony was incorporated into Indonesia after a U.N.-backed 1969 referendum called the Act of Free Choice, which has been widely criticized by human rights groups.

Sebby Sambom, a spokesman for the West Papua National Liberation Army (TPNPB), said the victims had no connection to the separatist movement.

It followed a similar incident in February, when the army said it killed a 18-year-old Papuan separatist in a shootout. The TPNPB said was victim was a civilian and no gunfight happened.

Indonesian human rights lawyer Veronica Koman told Reuters the separatist label was irrelevant, and the men should have been arrested.

“That was just (an) express killing. Even if they were members of the TPNPB, they were supposed to be tried then served justice,” she said. “Those were extrajudicial killings.”

Records by rights group Amnesty International showed the father and son were refugees among thousands who fled a military crackdown in 2018 in the Nduga area, in response to a separatist attack on a group of construction workers.