EDITORIAL: Abe is woefully missing in action in latest battle to combat the virus 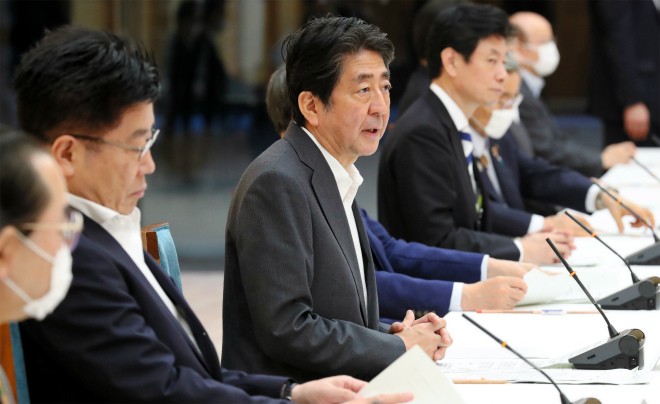 Prime Minister Shinzo Abe speaks during a meeting of the government task force combatting the new coronavirus in Tokyo on July 22. (Takeshi Iwashita)

While a fresh flare-up of newly confirmed COVID-19 cases is disquieting the people, Prime Minister Shinzo Abe is mostly invisible.

Abe has not attended special Diet sessions to discuss the problem nor has he held a news conference for weeks.

His absence from the public eye can only be interpreted as a sign that he is dodging his responsibility as the government chief to explain policy decisions and actions to the public.

One month has passed since this year's regular Diet session ended. Opposition parties called for keeping the Diet in session to ensure the best possible response to the outbreak, but the Abe administration refused the call to extend the session.

Since then, both houses of the Diet have been holding special committee meetings once a week to discuss mostly COVID-19-related issues while the Diet as a whole has been out of session. But Abe has not attended any of the meetings to answer questions.

Last week, both chambers' Budget Committees, the key parliamentary bodies to keep watch on the administrative branch, met. The primary issue for the meetings was the government's 1.35 trillion yen ($12.59 billion) "Go To Travel" program to subsidize trips to help the tourism industry, which is on its knees due to a massive hit from the pandemic.

But the ruling camp rejected an opposition request for Abe's attendance at the meetings.

Even though these sessions, broadcast live by Japan Broadcasting Corp. (NHK), offered great opportunities for Abe to communicate his messages directly to the public, the prime minister left answering questions entirely to Yasutoshi Nishimura, minister in charge of the coronavirus pandemic.

After he lifted the nationwide state of emergency in May, Abe proudly said, "We have been able to bring the outbreak mostly under control in only one and a half months through Japan's unique approach."

"The effectiveness of the Japan model has been shown," he crowed.

With infections spreading again, not only in Tokyo but also in many other parts of the nation, many Japanese are eager to hear Abe talk about whether he is still convinced that the nation can ride out this fresh outbreak with "the Japan model."

Broad public support and cooperation is vital for the success of the government's delicate and tricky balancing act between preventing the spread of the virus and nursing the badly damaged economy back to health.

This is a situation that requires the leader of the nation to explain meticulously in his own words the government's strategy for tackling this formidable challenge.

During the four months through May, Abe held eight news conferences to answer questions concerning the government's responses to the COVID-19 outbreak. But he has not held one for more than a month since June 18, when he met the media the day after the Diet went into recess.

Abe has answered questions from reporters several times as he entered or left the Prime Minister's Official Residence. On most of these occasions, however, he spoke only briefly and did not respond to questions.

When asked on July 22 by reporters whether he intended to explain about the "Go To Travel" campaign, launched on the day amid confusion, directly to the public, Abe said, "I'm now doing so by taking this opportunity." He also said Nishimura and Chief Cabinet Secretary Yoshihide Suga offer explanations about the program almost daily.

His remarks seem to indicate that he is unwilling to take the lead in facing doubts and questions among the public.

The government's policy responses to the pandemic are not the only issues Abe is responsible for explaining to the public.

He also needs to answer questions about the massive vote-buying scandal related to the successful election campaign last year of Upper House lawmaker Anri Kawai, which was mostly orchestrated by her husband, Katsuyuki Kawai, a former justice minister, and received unusually robust support from the Abe administration.

He should also be held accountable for the dubious sale of state-owned land to Moritomo Gakuen, an Osaka-based school operator linked to Abe's wife, Akie, in response to a desperate call for a new inquiry to uncover the truth from the widow of a former Finance Ministry official who committed suicide after becoming embroiled in the scandal.

Abe should not be allowed to remain silent about all these important matters by taking advantage of the fact that the Diet is in recess.