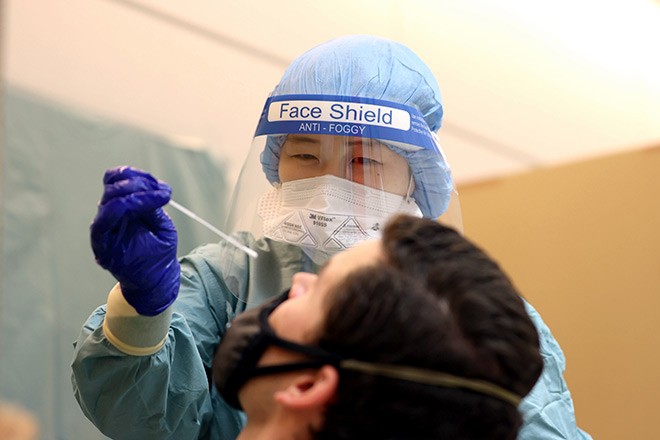 After a barrage of criticism at home and abroad, the government will allow foreign nationals who are stuck overseas to re-enter Japan, a step toward gradually reopening the border during the new coronavirus pandemic.

By as early as the end of July, the government will permit entry to them regardless of their visa status.

The measure only applies to those who went abroad before the entry ban was implemented on April 3 and does not cover people now in Japan who want to travel overseas for nonessential purposes.

“It is important to gradually resume international movement of people,” Prime Minister Shinzo Abe said at a July 22 meeting of the government’s task force dealing with the novel coronavirus pandemic.

The returnees will be required to take polymerase chain reaction (PCR) tests at the time of their departures to confirm they are not infected with the virus. They will also have to take another PCR test upon entering Japan.

If the tests are negative, they will be asked to self-quarantine for two weeks at home.

To prevent the virus from crossing the border, the government is expected to set a quota of 500 re-entries per day for the time being.

The government said its efforts to further ease the re-entry restrictions and open the border depend on the capacity of conducting PCR tests at airports.

The government explained that the entry ban was implemented in part because many Japanese nationals were expected to return from abroad, and officials had to secure and maintain a sufficient number of PCR tests for them.

Tens of thousands of foreign nationals left Japan before the government on April 3 banned entry to people from 49 countries and regions, including the United States, China and South Korea.

About 100,000 foreigners who hold different visas have been waiting overseas. Many of them came to Japan as business managers, technical interns or on study abroad programs.

About 12,000 of them left Japan on or after April 3, meaning the government expects up to 88,000 people to return after the restrictions are eased.

Japan is the only Group of Seven nation that has banned re-entry of foreign nationals on long-term visas, such as permanent residents, even if they have lived, worked and raised families for years in the country.

The restrictions have come under fire as discriminatory because Japanese nationals are not subject to the ban.

European countries have been particularly critical of the restrictions and have put pressure on Japan via diplomatic channels.

An executive of a foreign-affiliated company was unable to re-enter Japan, and the case nearly became a diplomatic issue.

According to a European Business Council in Japan survey conducted in June and July, 85 percent of 376 Japan-based companies said their business was negatively impacted by the re-entry ban.

Some employees who took business trips to Europe have been unable to return and remain separated from their families in Japan, the council said.

The government will eventually face the question of how to grant re-entry to the 2.43 million foreign nationals currently living in Japan.

The government has allowed re-entry to foreign nationals who have special reasons to leave Japan, such as attending a family funeral or undergoing a medical operation.

Abe also said on July 22 that the government will start negotiating with 12 countries and regions, including China, South Korea and Taiwan, to ease travel restrictions for business people.