Chilean extradited to France for killing of Japanese student 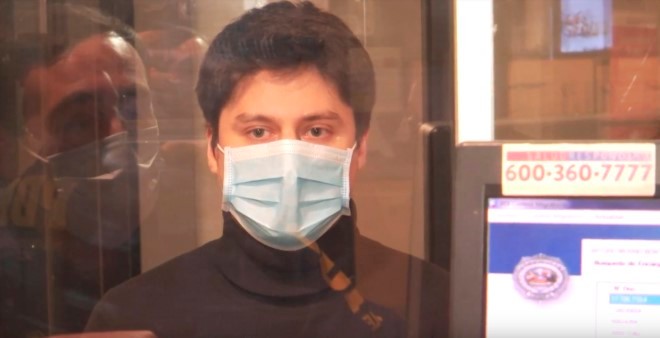 This screengrab of a video shows Nicolas Zepeda prior to extradition to France, where he faces charges related to the alleged 2016 slaying of his Japanese former girlfriend Narumi Kurosaki, at Augusto Merino Benitez International Airport in Santiago, Chile, on July 23. (Chile’s Investigative Police via AP)

SANTIAGO, Chile--A plane carrying a Chilean man accused of murdering a Japanese student in France took off from Santiago’s airport Thursday bound for Paris, where he will face trial for the alleged 2016 slaying.

Nicolas Zepeda, 29, had been under house arrest at his mother’s apartment in the Chilean resort of Vina del Mar since the Chilean Supreme Court approved his extradition in May. He is charged in France with premeditated murder in the alleged slaying of Narumi Kurosaki, whose body was never found.

Judge Jorge Dahm Oyarzun, who presided over the proceedings in Chile against Zepeda, said in an email The Associated Press had access to that he had lifted the house arrest order and instructed police to allow Interpol officers to transfer the defendant to the airport.

Zepeda was transferred to the airport in Chile’s capital Wednesday night. He was turned over to French officials and the plane to Paris took off Thursday.

“Today this stage in the process is closed and what remains is for French authorities to proceed with the process of judging Nicolas Zepeda,” said Antonio Segovia, director of the International Cooperation and Extraditions Unit of Chile’s Attorney General’s Office.

Kurosaki disappeared on Dec. 5, 2016, from her apartment in France. Zepeda returned to Chile before her disappearance was investigated. Authorities allege he was the last person to be with Kurosaki before she disappeared.

During court proceedings in Chile, Zepeda acknowledged that he had visited Kurosaki at her apartment on the night she disappeared, even though their romantic relationship had ended. He said they had consensual sex.

Zepeda’s lawyer, Joanna Heskia, has said the case doesn’t meet the standard needed for extradition and lacks the necessary proof demand by Chilean law that a crime was committed because the student’s body hasn’t been found.