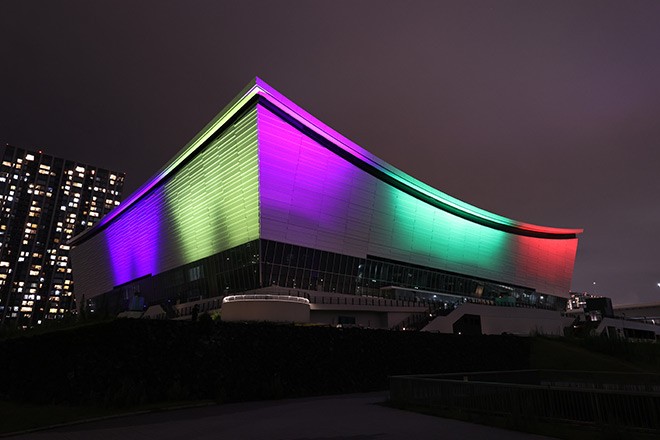 The Ariake Gymnastics Center is illuminated in five colors symbolizing the Olympics on July 23, one year ahead of the opening of the Tokyo Games. (The Asahi Shimbun)

Today was to be the opening day for the Tokyo Olympics, which was postponed after novel coronavirus infections spread around the world. With the pandemic still not under control, it is unclear whether the Games will open one year from now.

In an Asahi Shimbun survey this month, only one- third of respondents said the Tokyo Olympics should be held next summer as rescheduled.

The International Olympic Committee’s survey of athletes and officials in May found that they are facing tough challenges during this unprecedented time of the COVID-19 pandemic.

According to the survey, which was answered by around 4,000 sports community members from 135 countries and regions, nearly 60 percent of the athletes said they were finding it difficult to train properly, and about half were struggling to stay motivated.

With skepticism growing in society about the prospects of holding the Games, athletes are clearly hard-pressed to keep themselves mentally and physically fit.

The principal cause of their woes is, of course, the uncertain course of the pandemic. Compounding their challenges, however, are a lack of clear, convincing messages from organizers and delays and confusion in the process of preparations.

A raft of important questions are begging for answers.

How different should the event be from an ordinary Olympics? What are the priorities and what nonessential elements can be omitted? By what time and with what criteria will the decision on whether to go ahead be made?

Athletes cannot move forward and the public will remain uncertain without a clear vision and a path toward holding the Olympics under the current unusual circumstances.

Instead of effective decisions and actions, however, signs of discord have been emerging between the IOC and Japanese organizers.

When Japanese organizers proposed to simplify the opening and closing ceremonies to cut costs, the IOC demurred, apparently in fear of displeasing the television networks that pay huge sums for broadcasting rights and the companies that pay sponsorship fees.

Regarding the additional costs due to the postponement, the IOC unilaterally determined and announced the amount it would shoulder, underscoring a lack of coordination with the Japanese side.

Public relations for the event have also been plagued by problems. Yoshiro Mori, head of the organizing committee, recently said the cost of canceling the event would be “twice or three times more” without showing any basis for the claim. When asked about the grounds for his comment, Mori equivocated, saying he was only talking about a possible risk.

The cumulative effects of these disheartening episodes are dampening public expectations for the Olympics and even provoking antipathy toward the event.

Organizers and others involved should understand the gravity of the situation.

At the root of this chaos are serious structural problems with the Olympics, which has become too big and complicated for flexible action in response to the unprecedented challenges posed by the pandemic.

Management of the Olympics has become heavily dependent on manuals. While organizers like to voice the mantra of cost cutting, they remain slaves to the obsession of hosting “the best and largest” Olympics ever.

The vested interests of organizations involved are put before everything else, limiting the options for dealing with problems and precluding flexible responses.

The unprecedented postponement should be used as an opportunity to face these problems and fundamentally rethink the way the event is organized.

There are limits to what can be done before next summer.

Still, the Tokyo Games will leave an important legacy if it becomes the first to move toward reform that would lead to the sustainability of the Olympics.