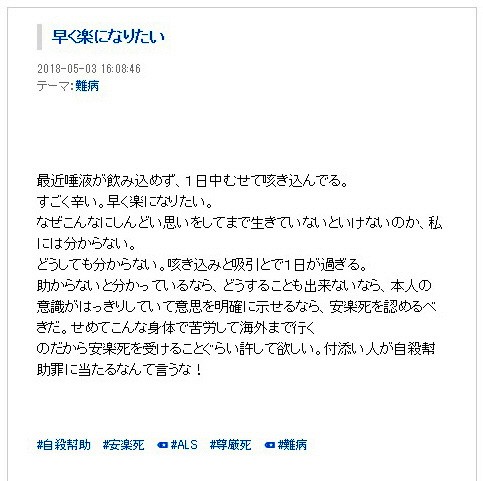 People with amyotrophic lateral sclerosis (ALS) and support groups expressed shock over the supposed “mercy killing” of an ALS patient that led to the arrests of two doctors on suspicion of murder.

“I hold strong concerns about some of the responses that have appeared on the internet indicating the posters would have done the same thing,” Yasuhiko Funago, an ALS patient who won a seat in the 2019 Upper House election, said in a statement released on July 23. “That makes it even more difficult for those with uncurable diseases to hold the feeling that they want to continue living.”

Funago, a member of the Reiwa Shinsengumi party, said he also initially felt like dying when he was first diagnosed with the degenerative muscle disease.

“However, through peer support, I realized that my own experience was beneficial to other patients and I made the decision to continue living,” Funago wrote. “What is most important is creating a society that protects a ‘right to live’ rather than a ‘right to die.’”

Hiroki Okabe, an ALS patient who heads the nonprofit organization Sakai wo Koete (overcoming boundaries), touched upon the fact that the woman who died had contacted the two doctors through social media.

“Because ALS patients suffer from a strong sense of loneliness and isolation, they may turn to social media as a way to seek out connections with others,” Okabe said. “Amid the novel coronavirus pandemic, I am worried about the greater possibility of becoming isolated.”

Taku Watanabe is a member of the Kyoto-based Japan Center for Independent Living, which provides support to those with uncurable diseases or disabilities.

He mentioned the case of Satoshi Uematsu, who was sentenced to death for murdering 19 disabled people at the Tsukui Yamayurien care home in Sagamihara, Kanagawa Prefecture.

Uematsu had argued that people with serious disabilities should be euthanized.

“If euthanasia is thought of in a more positive way, that could lead to eugenics,” Watanabe said. “I believe it is the responsibility of society to provide support to allow for continued living regardless of what situation an individual is placed in as well as to change the environment that may force some to feel that they would rather die.”

Doctors in the past have been found guilty of murder for carrying out what they thought constituted euthanasia through, for example, lethal injections. However, the halting of life-prolonging treatment has not been treated in the same way.

Although some doctors who removed respirators from patients who eventually died were referred to prosecutors, those cases have ended up without murder indictments.

But such cases have prompted medical professionals to become more hesitant about carrying out requests from patients to stop treatment.

And even with an increase of patients with uncurable diseases and requests from their families to end treatment, the national debate on euthanasia has not deepened.

The health ministry in 2007 released guidelines for end-of-life care that called for sufficient discussions between the patient and doctor as well as keeping a record of what was discussed.

The Japanese Association for Acute Medicine and the Japan Geriatrics Society have issued guidelines that also include the procedures for stopping medical treatment and nutritional support.

The emphasis in both sets of guidelines is for the medical team to make what it believes is the best choice for the patient.

Shoichi Maeda, a professor of medical ethics at Keio University, said there were many puzzling aspects about why the two arrested doctors acted in a manner that clearly goes against generally accepted wisdom among medical professionals.

He added that legal precedent makes clear that the use of drugs leading to death is not allowed, even if the patient had a desire to be relieved of suffering as soon as possible.