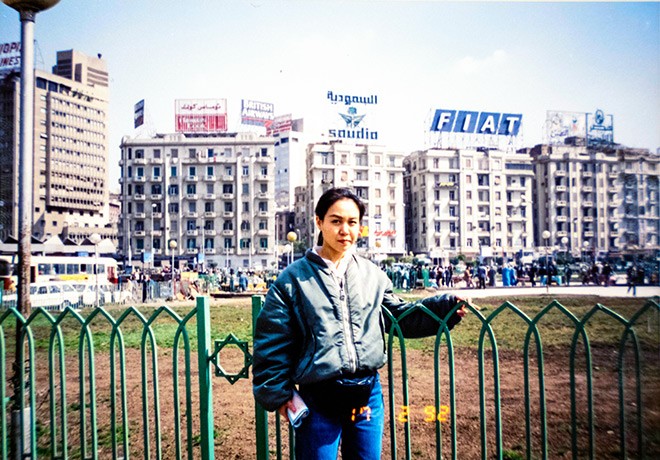 Yuri Hayashi in her 20s (Provided by Kazuo Hayashi)

KYOTO--A grieving father trying to come to terms with his daughter's decision to end her life is incensed that the two doctors involved accepted money to administer the fatal injection and said it is only right that they were arrested on suspicion of murder.

Kazuo Hayashi recalled that his daughter Yuri was always headstrong, even as a child, and always followed up on whatever decision she made.

Hayashi, 79, still finds it hard to accept that his daughter may have not wanted to go on living with the degenerative muscle disorder amyotrophic lateral sclerosis (ALS).

Kazuo was working at the Kyoto restaurant he owns when he received a frantic phone call on Nov. 30, 2019.

“Something bad has happened to Yuri,” said one of the care providers who worked around-the-clock to care for Kazuo’s daughter. The care provider was clearly upset and even though Kazuo had already opened his restaurant for business, he went straight to his daughter’s nearby apartment while still in his chef’s uniform.

Yuri’s attending physician met Kazuo at the residence and told him: “Something is wrong here. A crime may have been committed.”

The care provider apologized repeatedly to Kazuo for allowing the two doctors to enter the residence. They claimed to be acquaintances of Yuri.

Kazuo had difficulty grasping the situation, and it was only much later that he learned the care provider had been told to go to another room while the two apparently injected Yuri with a lethal dose of a drug.

Yuri was born and raised in the ancient capital, and never had any difficulty making friends, even from kindergarten. When some of them got into fights, she invariably was the one who broke it up.

She belonged to the badminton team in junior high school.

As a college student, Yuri loved to travel overseas and whenever she returned, she regaled her father with tales of her various adventures, including staying at hotels for 500 yen ($5) a night or being asked to pay an exorbitant price by a cab driver.

She always had something positive to say, even when things took a bad turn during trips to Italy, Nepal and the Philippines, among other places.

After graduating from Doshisha University in Kyoto, Yuri worked for a while at a department store before going to the United States to study architecture. She worked at an architectural design office in Tokyo after returning to Japan.

“She always went through with whatever she had decided to do. That was her personality,” Kazuo recalled.

But about 10 years ago, Yuri had difficulty sprinting across an intersection. Sensing something was not right in her legs, she underwent a thorough medical exam in a Kyoto Prefecture hospital and was diagnosed with ALS. At that time, she was told she had five years to live.

Kazuo remembers Yuri bawling her eyes out over the diagnosis and the fate in store for her.

About six years ago Yuri was able to visit Hawaii in a wheelchair, but gradually she lost the use of nearly all her muscles.

But Kazuo never saw any sign of Yuri wanting to give up. She began living by herself in an apartment near the family home because she did not want to be a burden on her father.

Kazuo often visited Yuri and brought whatever she needed. He pushed her in a wheelchair when they visited the Kyoto Imperial Palace. Despite the ALS diagnosis, he felt that her active personality remained unchanged.

He also did not learn until after her death that Yuri kept a blog in which she wrote that she did not want to live in such a dire condition.

“I was very surprised to learn that she wanted to die,” Kazuo said. “I would have definitely stopped her if I had known. I don’t think there is a parent anywhere who would give their consent.”

But Kazuo also had difficulty watching his daughter struggle.

“She bore up with whatever she faced for so long that perhaps she may have reached her limits,” he said.

While he believes her death was the course his daughter chose, Kazuo had nothing but disdain for the two doctors implicated in her death.

“I have no idea why they did what they did, but it is only to be expected that they were arrested,” Kazuo said.

He also expressed anger that the doctors received 1.3 million yen before Yuri died.

“How could they take money by taking advantage of the weakness of an individual?” Kazuo asked.