Hundreds rally in Manila ahead of Duterte’s annual speech 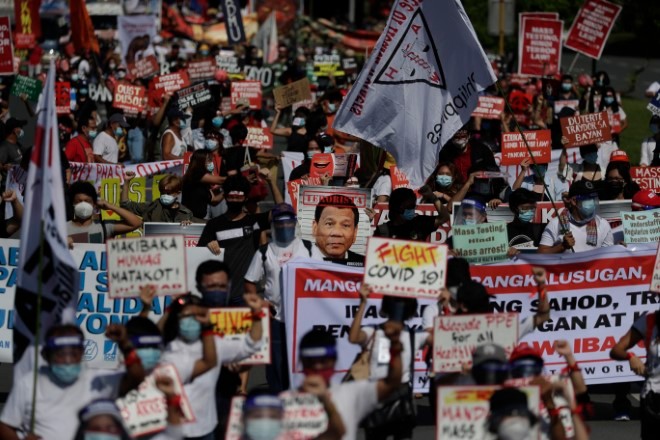 Marchers hold a picture of Philippine President Rodrigo Duterte, center, as they protest the 5th State of the Nation Address of Duterte in Manila on July 27. (AP Photo)

MANILA--Hundreds of protesters in the Philippine capital marched and staged motorcades Monday against a new anti-terror law and other issues despite police threats of arrests ahead of President Rodrigo Duterte’s annual state of the nation speech.

Four suspected protesters in a passenger jeep were taken into police custody in suburban Quezon city, but hundreds gathered at the nearby University of the Philippines campus, said Metropolitan Manila police chief Maj. Gen. Debold Sinas. Other groups protested via online video, including one that planned to burn Duterte’s “e-ffigy” in a virtual rally.

Authorities have banned public gatherings of more than 10 people under coronavirus restrictions, but protesters said the government was using the health crisis as a cover to mute widespread criticism over a wide range of issues, including its handling of the pandemic.

Waving flags and holding up placards, the protesters, wearing face masks amid a continuing rise in coronavirus infections, lashed out at an anti-terror law that Duterte signed early this month. More than a dozen petitions have been filed before the Supreme Court for the law to be declared unconstitutional, mainly on fears it could be used to muzzle legitimate dissent and human rights defenders.

The protesters also condemned the shutdown of the Philippines’ largest TV network, ABS-CBN Corp., after a committee in the House of Representatives, which is controlled by Duterte’s allies, voted to reject a new 25-year franchise for the broadcaster. Duterte had repeatedly threatened to shutter the network, partly for what he said was the company’s failure to broadcast his campaign ads in 2016 and its support of a rival candidate. ABS-CBN has denied any wrongdoing.

A convoy of vans carrying protesters staged a brief rally outside the TV network’s headquarters on Monday, displaying posters that read, “Stay safe, not silent.”

“The failed government response to the rising number of infected people, the worst economic crisis in history ... will be remembered as part of Duterte’s legacy,” left-wing protest leader Renato Reyes said.

Duterte, who took office in mid-2016, is expected to focus in his speech later Monday on his administration’s handling of the pandemic, which officials have described as a relative success but critics have labeled as chaotic and an alarming failure. He was expected to call on legislators to immediately pass a new bill that would grant him emergency powers to realign huge budgets to respond to the pandemic.

Duterte eased a lockdown in Manila, a bustling capital of more than 12 million people, and quarantine restrictions elsewhere on June 1 after the economy shrank slightly in the first quarter and unemployment soared. The economic downturn may be worse in second quarter and usher in a recession, economic officials say.

As a health safeguard, only about 50 legislators and Cabinet members will be allowed to be present at the heavily secured House of Representatives, where the 75-year-old Duterte is to deliver his speech. The venue may be shifted to the presidential palace in Manila if some of the invited officials are found to be infected with the coronavirus after last-minute tests, officials said.

Several legislators, senators and congressional staffers have tested positive for the virus in recent months.

The Philippines remains a Southeast Asian hotspot for the virus, with more than 80,000 confirmed cases, including nearly 2,000 deaths.