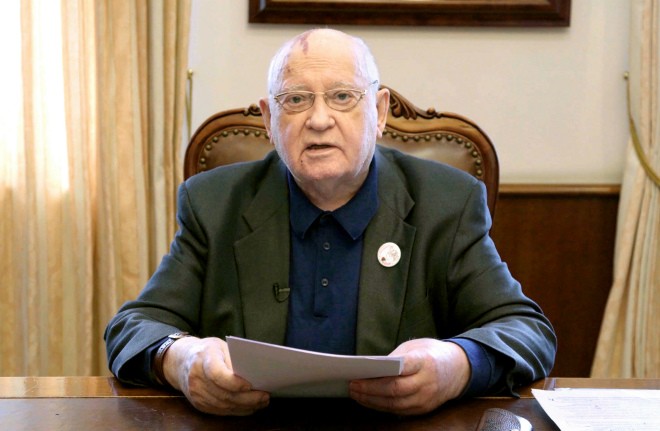 Mikhail Gorbachev, the former Soviet president, delivers a video message to an international symposium held in Nagasaki on Aug. 1. (Provided by Gorbachev Foundation)

A message to participants of the International Symposium for Peace 2020 “The Road to Nuclear Weapons Abolition” on Aug. 1, 2020, at Nagasaki

Dear participants of the symposium,

Dear representatives of The Asahi Shimbun,

To my important colleagues and friends,

I feel very happy to be able to address all of you taking part in this symposium seeking a world without nuclear weapons. It is symbolic that this meeting is taking place in the city of Nagasaki. Like Hiroshima, Nagasaki 75 years ago suffered great damage from the atomic bomb explosion, which killed tens of thousands of victims and left behind people with disabilities on the scorched earth. I once visited the city, and those memories have remained with me until now.

Unfortunately, for reasons everyone is well aware of, we cannot all gather here today. The novel coronavirus pandemic and the hundreds of thousands of fatalities are a new challenge that threatens modern civilization. That has also worsened various unresolved issues. What mankind now requires is for everyone to together foster multifaceted and comprehensive measures and to heighten international cooperation to a new level in order to create a global security system that is more dependable. And the theme of nuclear weapons must be at the core of that interest. I believe this is something that all of you understand very well.

I welcome the participation in this symposium of William J. Perry. About a year ago, he, along with George Shultz (a former U.S. secretary of state) and Sam Nunn (a former U.S. senator) released an opinion piece in The Wall Street Journal that began with the stern warning, “The U.S., its allies and Russia are caught in a dangerous policy paralysis that could lead--most likely by mistake or miscalculation--to a military confrontation and potentially the use of nuclear weapons for the first time in nearly 74 years.” It went on to say, “Our nations may soon be entrenched in a nuclear standoff more precarious, disorienting and economically costly than the Cold War.”

I share the concerns held by the authors of that piece and support the proposals they made. This is because I myself have on a number of occasions proposed a similar effort. That would mean the United States and Russia resuming a strategic mutual relationship and placing the highest priority among the various issues involving the United States and Russia on preventing a new arms race, further reducing nuclear weapons as well as discussing strategic national security issues. It would also call for a reconfirmation of the declaration issued in 1985 by myself and U.S. President Ronald Reagan that, “A nuclear war cannot be won and must never be fought.”

Dialogue between Russia and the United States should not only consider such specific problems as the issue of intermediate-range missiles that has become more urgent after the United States withdrew from the Intermediate-Range Nuclear Forces Treaty and an extension of the New Strategic Arms Reduction Treaty (New START), but should also include discussions on the fundamental issues of peace and national security as well as on the need to resume work toward a world without nuclear weapons.

Related to this, we must also concur with the message issued by a number of leading U.S. scholars, including 10 Nobel Prize laureates, that called on U.S. President Donald Trump to not resume nuclear testing.

I would like to express my respect for Rachel Bronson, the CEO of the Bulletin of the Atomic Scientists. Unfortunately, the needle on your Doomsday Clock has once again moved closer to the destruction point.

However, on the other hand, in the not too distant past, through the efforts made by the Soviet Union and the United States, the threat of nuclear destruction was pushed back, the Cold War was ended and we were able to cooperate on many issues facing mankind. I hope that you will continue with the extremely important activity of transmitting to and warning mankind of the possible destruction that is approaching.

Dear participants, as representatives of civil society, we must oppose a nuclear arms race and stand at the forefront of the movement to reduce the number of nuclear weapons possessed and work toward the ultimate goal of eliminating all nuclear weapons. And we must once again undertake a global effort toward that objective.

Note: Phrases in parenthesis were added by the translator.