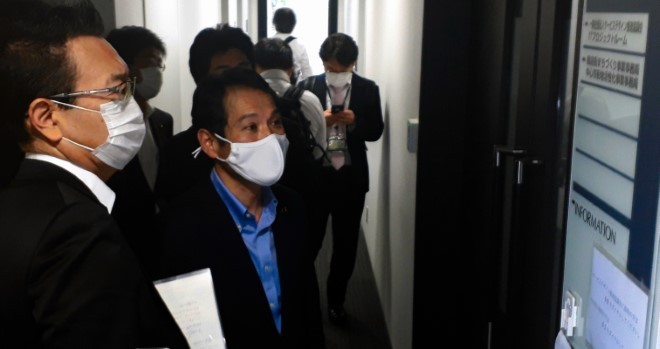 Opposition lawmakers visit the office of the Service Design Engineering Council on June 1 but were unable to ask any questions because no employees were there. (Ayumi Shintaku/Asahi file photo)

Off a narrow corridor above a store selling Persian rugs in central Tokyo, a small office houses a private operation which won a tender in April to distribute more than $20 billion (2 trillion yen) in government aid to businesses hit by the new coronavirus.

The agency, the Service Design Engineering Council, actually carried out only a fraction of that work, local media reported last month. Service Design was co-founded by Dentsu Group Inc., one of Japan’s most influential companies. It passed hundreds of millions of dollars to administer the project back to Dentsu, an advertising and PR company with close ties to Prime Minister Shinzo Abe’s ruling Liberal Democratic Party (LDP), government documents show.

Under the arrangement, Service Design won the contract to distribute the $20 billion, but actually took less than 1 percent of the total $718 million for managing the project and passed on most of the rest to Dentsu, which set up vetting procedures, websites and call centers, the companies and the Ministry of Economy, Trade and Industry (METI) said.

Dentsu, in turn, subcontracted the work again through its subsidiaries. The ministry has said that there were five tiers of subcontractors and at least 63 companies involved. Officials have disclosed the names of only 14 of those; the government has not fully accounted for contracts worth at least $247 million, about one-third of the total.

The arrangement led to confusion and delays for small business owners. Members of parliament have questioned how taxpayers’ money was spent during a national emergency.

Controversy over the contract--one of the largest that Japan has outsourced from its pandemic budget--is widening for Abe’s government, already facing a fall in public support over its handling of the pandemic. Questions are mounting from opposition politicians about the government’s links to Dentsu, a publicly listed company. At issue is whether Service Design helped shield Dentsu’s leading role from scrutiny. The government and Dentsu have come under fire in the past for their close ties.

Nearly three million firms have applied for payouts of up to $18,600 each, according to METI, which awarded the contract. Thousands are still waiting to be approved or paid. Some small business owners told Reuters the wait was so long and the payout so small, they had no choice but to fold.

Service Design is a private, not-for-profit group which does not disclose ownership details and has a staff of 22. Dentsu founded it with Pasona Group Inc., a temporary staffing agency, and Transcosmos Inc., an IT services firm; three of its nine directors and several of its employees are from Dentsu group companies.

The ministry declined to disclose the full list of companies involved because of a clause in Japan’s disclosure law. If revealing information about a company could harm the firm’s competitive position, it said, it is not obliged to disclose it.

There are no allegations of illegality in the process.

Opposition politicians blame the subcontracting for administrative costs rising to what one of them, Masayuki Aoyama, said was roughly 30 times more than a similar program for private individuals that was handled by local governments. They and some frustrated small business owners want to know why the government picked Service Design, and why and to whom the work to distribute the money was then farmed out.

“The whole thing is extremely gray,” said Kaname Tajima, one of dozens of opposition members of parliament who are campaigning for the ministry to release full details of how the contracts have been handed out.

“What is strange is the government is protecting Dentsu from scrutiny about lack of information and accountability,” Tajima said.

A poll in June by broadcaster TV Asahi found 73 percent of respondents thought the government had handled the program inappropriately.

The economy ministry said that as of July 20, it had received 2.9 million applications from small businesses and distributed funds to 2.67 million; Service Design said that for the most part, funds are being paid out roughly two weeks after an application is received.

Yusuke Tanaka, the official at the ministry in charge of the payouts program, said METI conducted a competitive tender and awarded the contract based on a comprehensive rating system. He said the ministry had not given preferential treatment to Service Design and Dentsu. Asked if involving private companies added costs to the project, Tanaka said that applicant vetting, and the cost of providing face-to-face support for the applicants, had lifted administrative costs compared with the scheme for private individuals.

Service Design, which told Reuters by email it tendered for the project because it had experience with an IT subsidy program, hired extra staff and found venues to help businesses with their applications, and retained a bank to help process the payments. It said Dentsu was best placed to carry out the ambitious and wide-ranging project.

Dentsu said the contracting structure was not opaque and that payouts were timely. Administering the project requires various companies and more than 10,000 workers, it said.

“To begin with, we did not think that it was possible for one company to handle a public project of this level,” the company said in a statement to Reuters on July 21.

The next day, Dentsu announced on its website that in response to public reaction over its dealings with the government in the small business program, it was conducting a review of its involvement in such projects. The company said it would not bid on any new contracts from METI until the review was complete.

Abe told parliament in June the outsourcing had been carried out appropriately. But support for his administration’s response to the pandemic fell to 36 percent on July 20, a Kyodo News poll showed, down from 49 percent a month ago.

“There’s no question the unclear scheme around the small business relief program has ... damaged public support over (the government’s) handling of the pandemic,” said Atsuo Ito, an independent political analyst.

Abe’s party, in power in Japan almost continuously since the 1950s, is an important client for Dentsu. Dentsu has done work for the party since the 1950s and ’60s, when it was hired to help it campaign in elections, and smooth the passage of an unpopular security treaty with the United States. It was also involved in the 1964 Olympics.

More recently Dentsu, which started as a news agency, has made sports marketing a centerpiece of its business. It served as a marketing agent for Tokyo’s bid to host the 2020 Olympics, for which it helped Japan raise a record $3.1 billion in domestic sponsorship. The tournament has been postponed for a year due to the pandemic.

The coronavirus aid was meant to help businesses like Takenobu Tonegawa’s video production firm, which specialized in corporate events. When cases of COVID-19 surged in spring, most of his clients canceled. The Tokyo-based entrepreneur waited four weeks for his $10,000 cheque from the government, he said.

While he waited, the 41-year-old found work delivering food on his bicycle for Uber Eats. Tonegawa said he had rung a call center operated by one of the companies under Service Design more than 100 times over three days to chase his application. Each time he was referred to a different part-time employee who was not aware of it. It was one of the most stressful periods of his life, Tonegawa said.

“I don’t blame the outsourcing itself, but if they run this system with taxpayers’ money, they should’ve operated it better,” he said.

Pictured on national TV as a sparsely furnished office where a handful of employees type at laptops under fluorescent lights, Service Design oversees the entirety of the small business aid project. It coordinates with companies and liaises with the ministry, METI’s Tanaka said.

Service Design competed for the relief contract with Deloitte Tohmatsu Financial Advisory, the ministry said. Deloitte had two meetings with government officials, one of them over the phone.

Service Design met with ministry officials in person three times and was joined at the meetings by Dentsu officials, the ministry has said, adding that it followed proper procedures. A spokeswoman at Deloitte declined to comment on the process.

As a nonprofit, Service Design is not required to release detailed earnings information. When it tendered for the contract it had not filed the required public records of its assets and liabilities for three years, Japanese media reported. It posted them on its website after the reports, and told Reuters it had not done so before because of an internal communication error.

The nonprofit passed most of the contract to Dentsu, which in turn handed down the work. The largest portion of the subsequent contract went to Dentsu Live, an event production company that is wholly owned by Dentsu, according to the ministry. Dentsu Live further outsourced the work, Service Design said.

Japanese ministries are free to award contracts to bidders who intend to subcontract some of the work but subcontracting more than 50 percent of a taxpayer-funded project is not normally advisable, governance experts say, citing standards issued by the finance ministry in 2006 to ensure transparency in public projects.

METI officials have told Reuters that even though Service Design subcontracted a large portion of the awarded funds, it still managed the “core” of the project.

Last month, after politicians asked the ministry to explain why Service Design was allowed to outsource so much of its work, it provided heavily redacted bidding documents, which some lawmakers said obfuscated crucial information. The ministry said it could not disclose further details due to competitive concerns.

Dentsu told journalists in June it didn’t become the primary contractor for the aid project because it believed Service Design had the necessary track record and felt recipients of the payouts may be confused if they saw Dentsu was involved in the payments.

Added to this, Dentsu told Reuters in July it had decided not to lead the work itself after its accounting department advised that doing so would “impact the balance sheet and possibly hinder normal operations.” It did not elaborate.

The ministry has set up a third-party panel to review how it awards public contracts and make recommendations on increasing transparency, it said.

By the time hotel owner Yoshiteru Yonezawa’s $18,600 stimulus arrived, he had decided to sell out. Going bust would make it hard for him to run another hotel, he said.

He used the cash to pay severance to around 90 employees of the hotel that his family has run for nearly seven decades in Hokkaido, a region popular for winter sports.

“What small business owners really want is for any kind of support program to start as soon as possible,” said Yonezawa in a tired voice.

The government has said it expects hundreds of thousands more firms to apply for its next round of relief funds.

It would be too late for Fumiaki Ichiyama. He ran Yonosuke, an old-school bar in Tokyo, for more than 40 years. Decorated with red lanterns and the day’s specials written by hand on paper on the walls, the bar was popular with media types.

Before the pandemic, it brought in $4,000 a day in sales, he said. In early April that slumped to $400. He could not afford the rent; the bar manager had had enough.

A few weeks after the bar closed, workers demolished the building. All that remains is a mound of rubble.