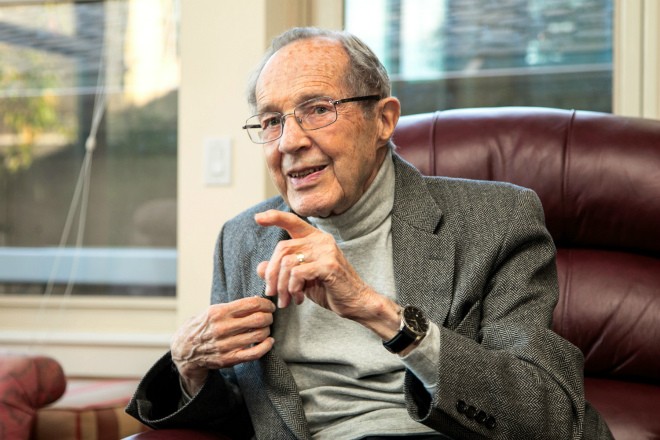 The human race's continued existence is at its most endangered point after World War II according to the Doomsday Clock, which has long symbolized the countdown until Earth’s destruction.

In January, the U.S. journal Bulletin of the Atomic Scientists, which manages the Doomsday Clock, put the time at 100 seconds to midnight.

William Perry, the former U.S. defense secretary who at one time was deeply involved in U.S. nuclear policy, recently published “The Button,” along with Tom Collina, director of policy at The Ploughshares Fund, in which they state that the seriousness of the nuclear crisis exceeds that of any time during the Cold War.

In an interview conducted through a video conferencing system, Perry and Collina were asked about the reasons for the current state of affairs and what had to be done to avert the end of the world.

Q: What is your view of the current situation?

Perry: There is the possibility of a nuclear disaster occurring now even more than during the Cold War. This situation is not well understood by either political leaders or the general public. If more citizens understand the situation, they may urge leaders to take action.

Even if the United States and Russia would use even a fraction of their arsenals in an exchange, that would be sufficient to simply destroy each other's countries. And in addition to that, because of the nuclear fallout and the so-called nuclear winter that will result from that, it would not just only destroy those two countries, but every country on Earth would be extremely seriously affected.

Perry was previously involved in overseeing work related to the strategic nuclear weapons system that is the main component of the present U.S. nuclear arsenal and has fundamentally changed how war is considered. Within that role, he was also involved in the introduction of such advanced weapons technology as stealth technology, the global positioning system and smart weapons.

Q: Could you explain your description in your latest book, “The Button,” about the mistakes made in U.S. nuclear policy?

Perry: U.S. nuclear policy is based on the wrong threat and as a result of that we are suffering more danger.

In the United States, the president has the sole authority to launch nuclear weapons. It's dangerous because the president is a human being and he's subject to mood swings and he's subject to maybe having mental problems or stability problems. President (Richard) Nixon, for example, during the last few months of his time in office was very heavily inebriated on a number of occasions. President (John) Kennedy had severe pain problems and he was taking heavy doses of medication. President (Donald) Trump is impulsive.

The most common example of (computer error) is we've had false alarms on three different occasions. On one of them I actually received a phone call in the middle of the night telling me that the computers were showing 200 ICBMs (intercontinental ballistic missiles) were on the way from the Soviet Union to the United States. We learned it was a false alarm. This was during the Cold War. Given the tremendous consequences of the decision (the fate of the world) and the mind-crunching time pressure (10 minutes or less) to make such a decision, it is not worth the risk.

In February 2018, the Trump administration released its Nuclear Posture Review in which it stated it would increase its options by allowing the use of low-yield nuclear weapons in retaliation for an attack by conventional weapons. It has also not yet abandoned a first-use policy regarding nuclear weapons.

Q: In August 2019, the United States allowed the ending of the Intermediate-Range Nuclear Forces Treaty (INF) with Russia and in February 2020 began installing low-yield nuclear weapons on its submarines. What is your view of such moves?

Collina: We were particularly opposed to the low-yield weapons because we see them as possibly making nuclear war more likely. If a president perceives the weapons to be more usable and therefore closer to conventional weapons, then he might be more likely to use them. There's this very dangerous theory that nuclear war is controllable at low levels. That if one side uses a low-yield weapon, the other side will use a low yield and it'll stay there. Now, that's an unproven theory that I think is very dangerous.

Q: How should the United States change its nuclear policy?

Perry: It should issue a declaration of no first use of nuclear weapons.

Collina: After the United States decided on a no-first-use policy, it can safely phase out the existing ICBM missiles without replacing them. This would save $150 billion (15.829 trillion yen); it would take the missile states out of the crosshairs; and it would remove the danger that our ICBMs could trigger an accidental nuclear war.

Q: What effect will the U.S. presidential election in November have on U.S. nuclear policy? We are worried about the effects of the novel coronavirus on policy.

Perry: The new president will have to make a very stark choice between lowering the defense budget or simply further increasing the deficit spending, which is already going to be astronomical as a result of the coronavirus and the economic disaster this caused. The most obvious place to make reductions would be in the nuclear field.

Collina: Before (U.S. President Barack) Obama stepped down, Vice President (Joe) Biden gave a speech where he essentially endorsed a no-first-use policy. We would hope that a President Biden would adopt no first use and certainly extend the new START (Strategic Arms Reduction) treaty (with Russia that is scheduled to end in February 2021).

In 2007, Perry issued an opinion piece about a world without nuclear weapons along with former U.S. Secretary of State Henry Kissinger and two others. The arguments made in that piece constituted the theoretical pillar to the speech given by U.S. President Barack Obama in Prague in 2009.

Q: President Obama was ultimately unable to achieve his pledge to bring about a world without nuclear weapons. What is your view?

Perry: I have no doubt President Obama was entirely sincere in his desire to eliminate nuclear weapons. He set out to do that in a step-by-step fashion in the New START treaty agreed to in 2020 with Russia. But then Republicans in the Senate made New START a partisan political fight. As it was, ratification was difficult, and the Obama administration had to pay a high price on nuclear modernization.

Q: Regarding nuclear arms reduction, an important factor will be how China is brought into the discussions between the United States and Russia. But if the United States reduced the number of its nuclear weapons, China might see that as a sign of weakness and some experts point to the possibility that could lead China to ramp up its defense spending. What is your view?

Perry: The Chinese have an order of magnitude fewer ICBMs than we have, and so their position continues to be, as soon as we get down to the numbers approximately what they have, then they would be willing to join in discussions.

Q: Until the novel coronavirus pandemic, weren’t you planning to visit Nagasaki and Hiroshima in August? How do you view the decision by the United States 75 years ago to drop the atomic bombs on those two cities?

William Perry was part of the U.S. occupation forces that were based in Tokyo and Okinawa after World War II ended. After his discharge from the Army, he studied at Stanford University and Penn State and eventually obtained a doctorate in mathematics. He served as defense secretary under U.S. President Bill Clinton.

Tom Collina is director of policy at Ploughshares Fund, which has long been involved in the anti-nuclear movement. He has worked for about 30 years in the private sector working on various nuclear policy issues, such as nonproliferation.

(This interview was conducted by Masato Tainaka and Yoshiyuki Ito.)