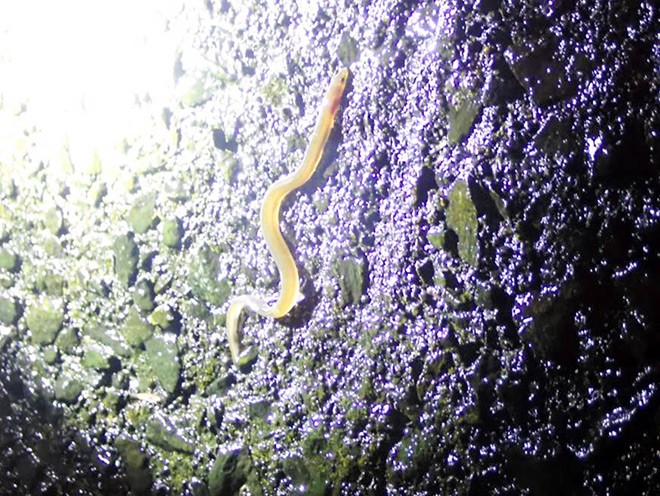 A young Japanese eel climbs a rock wall along the Yafusagawa river in Ichiki-Kushikino, Kagoshima Prefecture, on Sept. 19, 2018. Researchers believe that eels are also climbing a rock wall at the Ryumondaki Waterfall during the night. (Provided by Kazuki Matsushige)

Scientists say Japanese eels can likely climb a waterfall that drops 46 meters, a finding that could offer clues in helping to combat dwindling numbers of the endangered species.

Eel numbers are shrinking, partly because of river development. The fish reach adulthood in rivers, but river environments have deteriorated due to dams and weirs, which pose obstacles for eels trying to migrate.

Scientists say it may be possible to curb the depopulation of eels by replicating natural features on the surfaces of dams and other structures to allow eels to scale their heights while swimming upstream.

Japanese eels hatch off the Mariana Islands in the Pacific and ascend rivers in East Asia.

While they are young and are only about 10-20 centimeters long, they climb up relatively dry rock surfaces during the night. Hence the Japanese saying, “climb like an eel” (unagi nobori), which means to skyrocket.

A study by the Environment Ministry said an object measuring 40 cm or more in height can block eels’ migration paths.

The International Union for Conservation of Nature included the Japanese eel in its list of endangered species in 2014.

Mochioka and his coworkers studied the habitat of Japanese eels in summer 2018 along the Amikakegawa river in Aira, Kagoshima Prefecture. The river basin contains the Ryumondaki Waterfall, which rises to a height of 46 meters.

The scientists caught a total of seven eels at three sites upstream of the waterfall. Their body lengths range from 20 cm to 66 cm, and they were estimated to be between 2 and 5 years old.

The researchers enlisted the help of a local fisheries association during their study and learned that no eels had ever been released in the river’s upstream areas--suggesting the eels made the long climb on their own.

The body colors and sizes of the captured eels led the researchers to conclude they are natural to Japan and had traveled all the way from the sea.

The rock surface of the Ryumondaki Waterfall contains fine cracks and is covered with moss. Researchers suspect the natural formations make the surface easier for eels to climb and rest on than a concrete wall.

But the scientists found it difficult to approach the waterfall, so they have yet to witness an eel in the act of climbing it.

According to Mochioka, eels are believed to climb, for example, the Kegon Waterfall in Nikko, Tochigi Prefecture, but it has never been scientifically proven. In some cases, eels had been released in upstream areas.

“The abilities of eels are so stunning,” Mochioka said. “We could broaden the habitat of eels if only we improve the shapes of dams and weirs, no matter how tall they are.”

He said he and his colleagues plan to use high-performance cameras and other technology to confirm that the eels are climbing a waterfall. They will study how long it takes for the eels to climb, as well as the success rates, routes and other details of their ascent.

The study was published online on July 7 in Ichthyological Research, a scientific journal.